There will be milling starting tonight 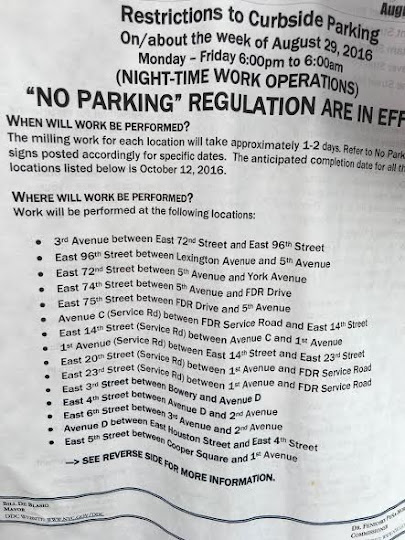 You may have seen the recent arrival of these flyers from the city... noting milling taking place on a handful of Manhattan streets, including a good number in the East Village. 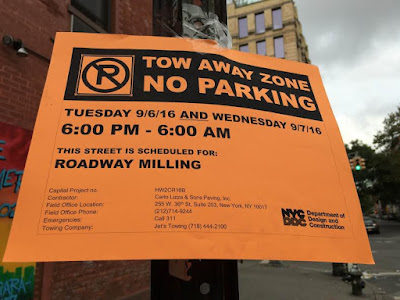 The signs note that the work will take place between 6 p.m. and 6 a.m. So thankfully you won't even notice most of the work because you will be sound asleep!

Meanwhile, in Great Moments in Project Overlaps, Dave on 7th notes that Con Ed has been replacing gas mains on Seventh Street between Avenue B and Avenue C... 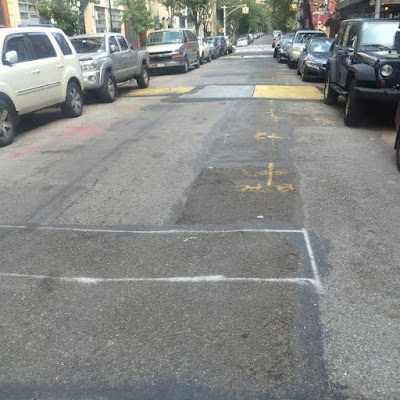 Per Dave: "Apparently the city is going to repave the street before Con Ed is done digging it up." 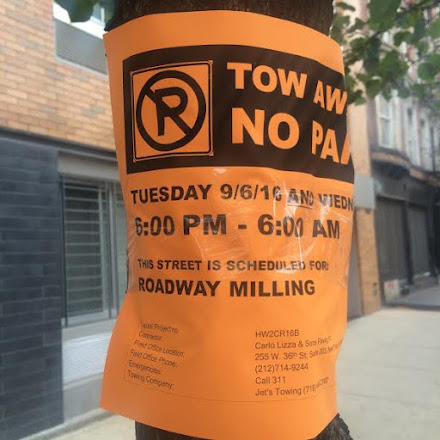 Just to make matters more annoying, the signs posted (at least those along 7th Street) do not seem to match with the schedule posted online. Not surprising they would also not coordinate with ConEd. Good luck to all of us trying to park this week!

Why do they never mill 9th Street east of TSP?

People are always milling about in the East Village.

If you don't move your car, will they mill it? or, mill around it?

Fuck. This sucks. How will those of us who live on 7th sleep?

What the fuck is milling?

Pavement milling (cold planing, asphalt milling, or profiling) is the process of removing at least part of the surface of a paved area such as a road, bridge, or parking lot. Milling removes anywhere from just enough thickness to level and smooth the surface to a full depth removal. There are a number of different reasons for milling a paved area instead of simply repaving over the existing surface.

I remember when they used to just pave over the old asphalt, creating layer on top of layer of asphalt. After a few times the asphalt got to be so high there was almost no curb left, as the street level got higher and higher. So then they started milling with these awful machines that scrape off the old road, followed by even more awful asphalt cookers that spew tar fumes as they lay down the hot material. But when it's done the streets are nice and smooth for a month or two, and then the potholes start to reappear. Then the street gets dug up in spots and patched up from all the other repairs and construction. It's the cycle of street life.

They're towing cars 6 at a time. Watching from the stoop excited like a small town hick. Milling party all night!

On 3rd Street between 1/2 Aves, all seemed fairly quiet last night as I slept through the milling until I was abruptly awoken by a "BOOM! Thump... Thump... Thump... Thump..." as the crew's milling vehicle apparently ripped up some sort of metal from the street that got caught in its mechanism.

yet the busiest vehicle heavy load street in the nabe St Marks Place between 1 and 2nd ave gets no love since 2006 when the crook who built 56 St Marks broke the water pipes and the shody Empire State trench that went from mid block to second ave for verizon for 9 years buildings shake and sink holes appear yearly and are hastily and shitily fixed, insane the roads in the city are in the worse state of repair in 30 years but hey the cube is coming back and 3rd ave is done for a few months until they have to dig it up again like Houston street LeTiger Ble Steel it's the same thing is it just me i feel like i'm take crazy pills!

So we've been milled... When the hell do they repave the street?