2 units hit the market at Poppy Lofts on Avenue B 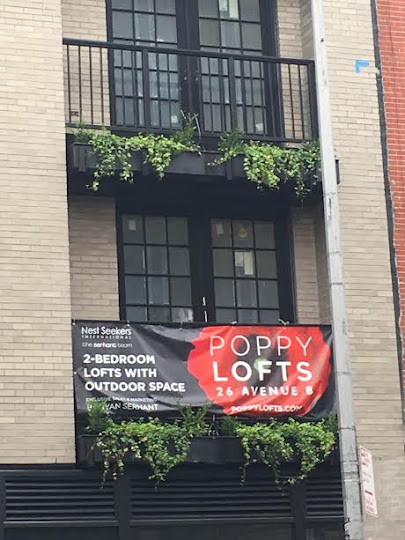 Back in September, we noted that the new condos at 26 Avenue B near Second Street were going by the Poppy Lofts, a name that likely has nothing to do with the area's former reputation as a heroin hotspot.

In any event, there are now two units available via Ryan Serhant's crew at NestSeekers International.

Here's more about the development in general:

Positioned at the convergence of the East Village and the Lower East Side, Poppy Lofts is an exciting new development that possesses 5 incredible floor-through units with stylish interiors and private outdoor space. The building features a Glen-Gery dark gray brick façade adorned year-round with outdoor planters that contain seasonal flowers and manicured greenery. Amenities include a virtual doorman system, deeded storage units, bike racks, and a private keyed elevator.

The two-level penthouse includes four outdoor spaces. Here's the description of that unit via Streeteasy, where you can also find a bunch of photos of the place:

The first level of the home is conveniently partitioned into a living area and a sleeping area. The living area contains an open-concept living room, dining room, and kitchen as well as a powder room and a slender balcony adorned with French doors. The kitchen is equipped with solid quartz countertops, cabinets from German Kitchen, and a suite of luxurious appliances that include a Bosch electric cooktop and wall oven, a Blomberg stainless steel refrigerator, and a Sharp microwave. Both of the homes spacious bedrooms lie opposite the living area. 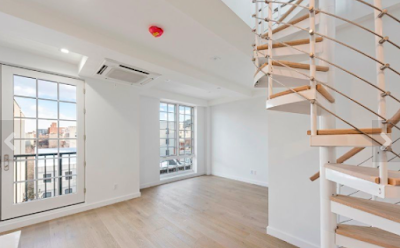 The second bedroom has its own closet space and a west-facing window while the master bedroom contains a pair of closets, a pristine ensuite bathroom, and a roomy balcony. On the second level resides a sizable office/den/library that has eastern and western exposure and comes with an attached full bathroom. The room is flanked on either side by a pair of large terraces that work as spaces for entertaining guests or as secluded oases of privacy.

Avenue B condos near former heroin hot spot named Poppy Lofts
Posted by Grieve at 4:20 AM

Email ThisBlogThis!Share to TwitterShare to FacebookShare to Pinterest
Labels: 26 Avenue B, Poppy Lofts

Places like this show how sick and lacking of empathy these developers and the marketing people really are.
Nothing seems off limits when it comes to branding and I seriously doubt those buying these apartments would connect the name to a local epidemic which destroyed so many lives.

It's got a "virtual doorman system," which I think is an intercom, and a "pristine" bathroom which is definitely better than a pre-soiled one.

Somebody should alert them that their copy writer has been drinking again.

Those stairs don't look pet friendly or very accommodating for moving furniture up them. And the bathroom looks cold and institutional, maybe it's the striped gray tiles. If I had 2+ million I'd take it somewhere else.