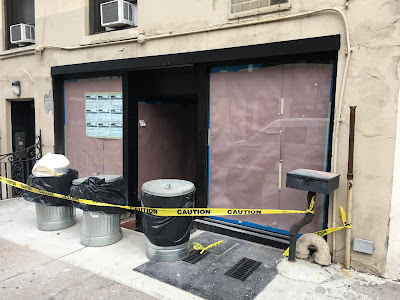 As we first reported last November, Artichoke Basille's Pizza is apparently on the move to a new space across from its current 14th Street digs.

EVG regular Pinch passed along word of the progress on the storefront (above), which had been vacant for as long as we can recall.

No word on when the popular pizzeria might be ready for the move. 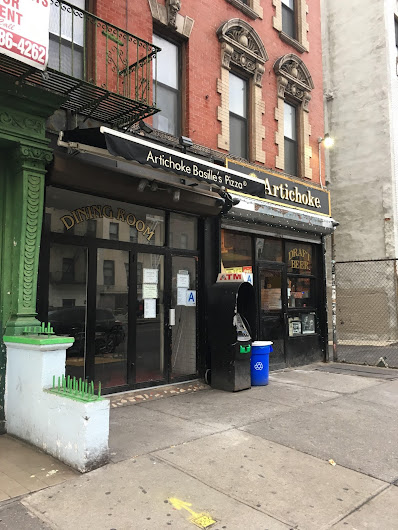 There are currently nine Artichoke locations, eight in NYC and one in Berkeley, Calif.

Previously on EV Grieve:
Artichoke appears to be moving into a new space on 14th Street
Posted by Grieve at 4:00 AM

If anyone reading this wants to Oppenheimer up a business pizzarea might be the best choice, dry cleaners is #2.

I tend to walk on the south side of 14th street on this block, I won't miss looking at the pack of 20 somethings wolfing slices on the sidewalk, good news!

So they're basically Pizza Hut now. I mean, why does a successful pizza place need to become a chain in its city? Why not do your one place really well and get people to come to you and not over-extend so you can actually stay there long term?

I always go for a slice of the life changing crab pizza there before going into Nowhere bar for Happy Hour. Boy, I love NYC.

Artichoke is nasty, especially their namesake slice - it's like microwaved alfredo sauce slop on pizza. Dumb move on the landlord for letting them move across the street... should've bargained. Oh well!

@7:52 PM: So you have your life changed every evening?

Very overrated pizza. Tried a slice at their Chelsea/Highline location. It was inedible.

Ben's Pizzeria > Artichoke Pizza if only for the insufferable hipster/NYU/Cafe Wha?/millenial/FourSquare/scared to eat non-chain pizza doofuses including girls with Cocker Spaniel locks who patronize Artichoke.

A telltale sign of a solid pizzeria is that group isn't its majority clientele.

Ditto on the horrible pizza there. I heard so much about it and saw the lines, so one I got a slice. Was hoping it was something like the pizza in Rome. But man, it was so bad, I threw it out. Like ketchup on a soggy saltine cracker.