Sushi and pizza coming soon to the Bowery 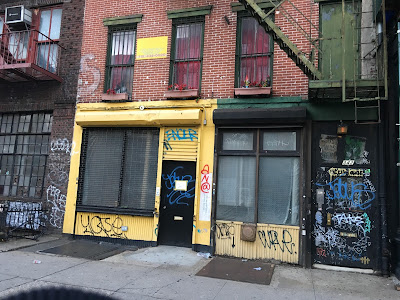 There has been some activity in recent weeks/months in the south storefront at 342 Bowery between Great Jones and Bond.

Eater did a little sleuthing and learned that the space will apparently be called Poke Run, a restaurant operated by former Olympic athlete-turned-chef Michael Stember, who has been hosting secret sushi dinners — known as Sushi Belly Tower — in recent years. (BoweryBoogie notes that Stember is serving sushi in a new venture with Happy Ending on Broome Street.)

No. 342 was last home, in 2015, to a Subway (sandwich shop). The Subway opened here in late 2009, taking over the space after Downtown Music Gallery moved to Monroe Street.

Meanwhile! Activity continues a few doors to the south at No. 334... 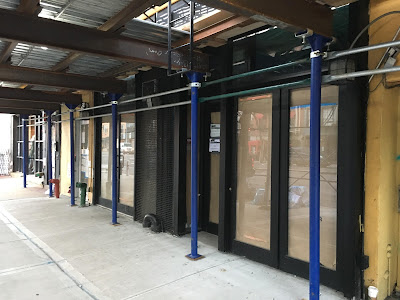 DOB permits show that a pizzeria is taking the space. No other info is available at the moment. Updated: Apparently pizza-master Gino Sorbillo — the best in Naples? — will be opening shop in this space. Read more about him here.

Perhaps the new operator can reverse the curse here. It was home to Forcella Bowery for nearly three years until November 2014 … only to be replaced in December 2014 by the tapas-friendly Espoleta, which closed six months later to make way for Gia Trattoria. They quickly closed. Then PYT arrived in October 2015.

Previously on EV Grieve:
A step back in time on the Bowery
Posted by Grieve at 4:00 AM

So many busineeses have gone bust here that they should change the name of The Bowery to Bummer Boulevard (which would be appropriate, since this is where all the bums used to live) or maybe Dead Dreams Drive. Lets put up warning signs that say 'Danger: Investing Here May Be Hazardous To Your Health." I'm starting to feel sorry for these amateurs who don't realize the Bowery is a dead zone between the East and West Village because there is almost no cross traffic -- most people traveling between the East and West Village cross between 8th and 14th St, or down on Houston to go to SoHo. All the North/South traffic is to and from Chinatown, mostly by bus or by car and almost everyone bypasses this area. Investors be warned: it's The Bowery, where all your dreams come to die.

There's very little walking traffic on that stretch of The Bowery. Why would you open a business there? Stupid? Desperate? WHY? The Bowery is strictly a resume address. I guess that's good enough.

Possible point of interest for some: The Dutch West India Company granted large patents of land to settlers known as "bouwerij"; the old path leading to them was appropriately named The Bowery (via this morning's Instagram post by discovering_nyc).

It's so weird how much the one sliver of the Bowery where CBGB has changed from when it was briefly shown in Summer Of Sam (shot in my guess between late '98 and early '99 since it was released on 7/2/99) to now. 1998-99 might as well been half a century ago.