Community meeting set to discuss Mt. Sinai's plans for an expanded facility in the East Village 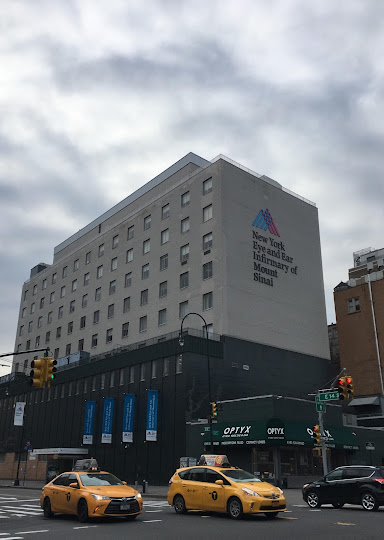 As you probably know, major changes are coming to the Mount Sinai Health System, starting with a transformation of the New York Eye and Ear Infirmary on Second Avenue and 14th Street... 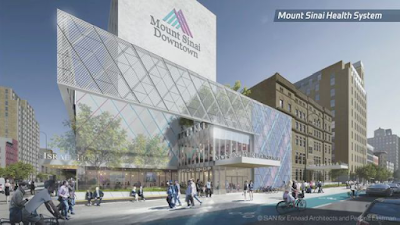 We won't rehash all the coming changes (outlined in this post). There's an FAQ page as well that may have details you are looking for related to health care and the construction. 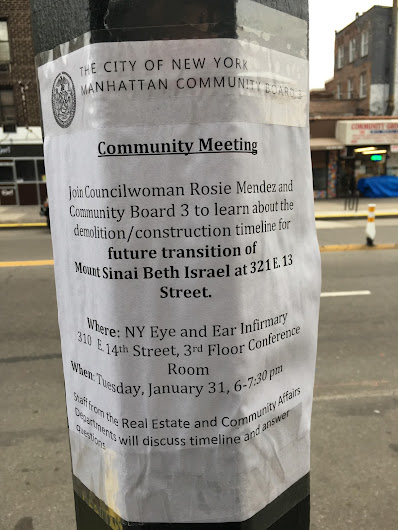 Reps from Mount Sinai's Real Estate and Community Affairs Departments will be on hand for the discussion, taking place from 6-7:30 p.m. in the New York Eye and Ear Infirmary, 310 E. 14th St. (in the third floor conference room).

The hospital's downsizing from its campus on First Avenue and 16th Street is part of a $550 million plan by Beth Israel’s owner to adapt to a changing health care landscape where patients are using more outpatient care and spending less time in hospitals, as previously reported.

Mount Sinai will sell the 16th Street property, which has a current reported value of $600 million. Beth Israel reportedly has outstanding debt of some $200 million.

Kenneth Davis, president and chief executive officer of Mount Sinai Health System, previously stated that it will cost $250 million to build the new hospital and upgrade the New York Eye and Ear Infirmary on Second Avenue and 14th Street.

Previously
Posted by Grieve at 4:24 AM

I am a nurse here... This hospital is not dying a natural death. The admin is moving departments out of the hospital and closing floors. Then they can say the admissions are down and they are losing money.
After that, they can make 600 million from selling the place.

Condos over care for the community!
Attend the meeting!

How do you call it an expanded facility when they are selling their main buildings and will end up with far fewer beds?

This meeting is narrowly focused on the demolition activities of the 14th street building for the information of the residents and businesses that will be impacted. The hospital has committed to having a public meeting about the other issues mentioned in the comments--but this meeting will only be about demolition/construction impacts on neighbors.

bet the mayoe kmows all this
and the elected officials - our "representatives" too
what is their job, anyhow?

One of our family doctors is affiliated with Beth Isreal and was telling us for many months before the announcement was made that Mount Sinai was intentionally shifting services out of the hospital to make it look like it was underutilized. As a result, doctors and nurses have fled to other hospitals. This was all a ploy to sell off the properties and make a bundle fom the real eatate, To claim this is an expansion is a joke--they will have a smaller footprintt spread out to smaller locations and many fewer hospital beds. How is that an expansion? We have enough walk-in clinics already -- what we need are hospitals for major surgery and neonatal and maternity care, all of which they have moved to other facilities. They aren't a hospital anymore, they are a real estate company profiteering off of their holdings and giving us second rate care in return. Welcome to New Yorkistan.

I wonder if they have taken into account the long term probability of the Second Avenue Subway construction that will make this corner a disaster area for many years once they commence the phase of construction that puts a subway station right there.

Big real-estate money interest has invested the publics most important services and facilities. Our neighborhood is undergoing such rapid change with in soaring rents for residents and small businesses which can only mean our city leaders must be championing this gold rush or it shows how powerless our democracy has become. It is unlikely news outlets like the NY Times will be critical of this real-estate deal since they are too tied in that industry to speak against it. #45's weekend ban on immigration is on par with the social and economic cleansing the East Village and other working class neighborhoods in NYC are experiencing now.

So what do we do with no full-service hospital from the Battery to Bellevue? All my doctors are at Beth Israel, and I have major pulmonary and cardiac issues. I am not the only one.

This was a blatant money grab by Mount Sinai... They started shifting work away from Beth Israel as soon as they merged...
The new "hospital" is really an 80 bed urgent care center.
Just hope that you do not get a heart attack when you leave your shiny new Condo...

I honestly think that the U.S. would be better off simply abolishing non-profit tax status. The healthcare and education industry has abused the non-profit corporate form to such an extent I'm willing to throw the baby out with the bathwater.

Anon 7:26: What you do if you have a heart attack as you leave your condo? You hope they get you to Bellevue in time! It has the best emergency care room in the city and one of the best in the world. Or, you go to NYU.

This has me worried. First Saint Vincent's, now this. I thought closing St. V would strengthen Beth Israel''s position as a medical provider, not lessen itm