Landlord Goldman Properties confirmed yesterday that the Spanish street-art duo PichiAvo will be the next artists to work on the Houston/Bowery Mural Wall.

Here's more on the announcement via the EVG inbox...

The artist team are recognized for their ability to ignite relationships between art and social contexts — fusing classic ancient gods and contemporary urban art to create exciting new works. Painting will begin, weather permitting, Monday, January 23, and will continue throughout the week until approximately February 4. Titled “Urbanmythology” the mural will remain up until the end of May 2017.

According to the artists, “We are excited about the opportunity to bring our “Urbanmythology” to the Houston Bowery wall, where we’ll combine classics that coexist in the city. It is an honor and we are very excited to share our artistic concept with New York and the world in a year where we celebrate 10 years as PichiAvo, enjoying and working together as one.”

This will be their first mural in NYC. Here's a sampling of their work from Lisbon in 2014... 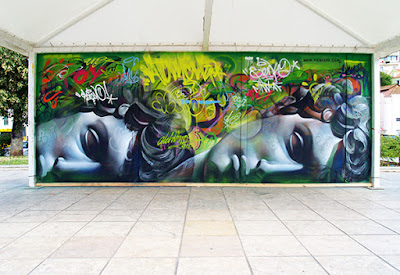 And here's how the wall was looking early yesterday...where there's a blank slate for the taking... 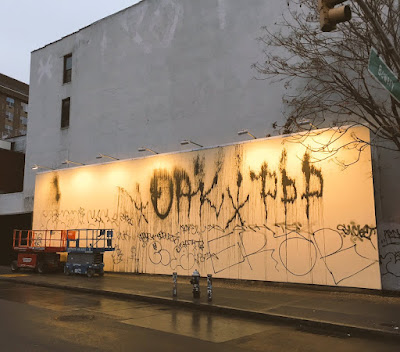 After nearly a five-month run, workers recently removed the stenciled tapestry by Logan Hicks.
Posted by Grieve at 4:00 AM

Somewhere on there is the Keith Haring mural.