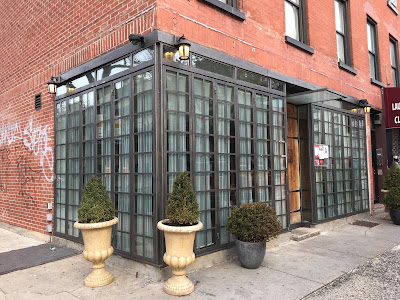 East 12th Osteria looks to have permanently closed. Someone removed the sign from the front door here on First Avenue at 12th Street... 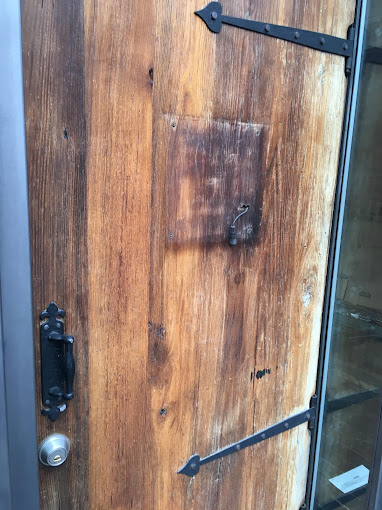 EVG reader dwg said the dining room was cleared out on Friday. 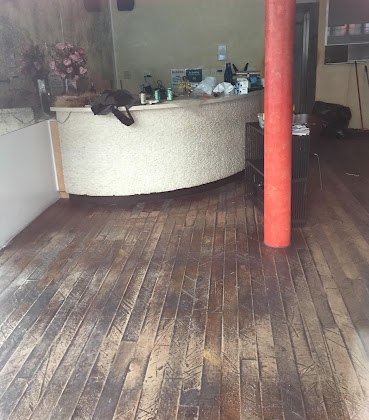 Back on Dec. 12, the State seized the space for nonpayment of taxes. Eater reported that restaurant serving Northern Italian cuisine owed more than $190,000 in unpaid taxes.

However, without any notice, East 12th Osteria then resumed service several days later.

The restaurant opened in March 2013.

Updated
From restaurant's website: "East 12th Osteria will be moving to the West Village, and would henceforth change name to Osteria."

A spokesperson for the restaurant told us in an email:

We opened 2 days after NY State Department of Taxation and Finance shut us down. We've paid the principal amount months back, it is the interest and other fees that we're trying to negotiate down. 120% interest is a lot.

Having said that, earlier this month we chose to close down East 12th Osteria because we found a bigger location in the West Village, and will be opening sometime in the summer.

East 12th attracted regulars Ron Chernow... Preet Bhararra and Scott Stringer, lots of NYU faculty and gallery owners. We thank our supporters in the East Village — a warm welcome awaits them at our next Osteria, opening soon just a few avenues away.

This was a date place in an age when noone is dating anymore. I read that Millennials get freaked out if someone they meet online wants to meet up nd have dnner with them becaise they lack the social skills to pull that kind of social interaction off. They just want a quick hookup and don't even use their real names. In the old days that kind of social interaction was called prostitution, or promiscuity, and everyone wanted to go out to dinner before deciding if that person was the type of person you wanted to get intimate with. Now everyone is one Craigslist/Snapchat/Tinder hookup away from a happy ending, so who needs a nice restaurant to take a date to?

Walked past it Saturday evening and didn't even notice they were gone; that's how much impact they made. And since they were a bit snotty to me when they first opened & were very busy, I never did eat there. No loss.

"I read that Millennials get freaked out if someone they meet online wants to meet up nd have dnner with them becaise they lack the social skills to pull that kind of social interaction off."

Ha! For all the millennial bashing you do, I would have thought you had at least tried to get to know a few. Instead, you make wild generalizations based on something you read? So Millennials are everywhere and ruining everything, but you try to understand them through a sociological study as if they were an ancient tribe?

How is it possible to owe that much in taxes for a place that was opened for 2 or so years? WTF?

@abfus Here's another wild generalization based on facts: Millennial hookup cultiire has led to a massive increase in STDs. They don't date, they just screw each other, usually without using condoms. They don't need a nice date restaurant, they need a condom bar.

NY Post: STD cases among millennials are up nationwide — and are spiking in the five boroughs.

Reports of syphilis have soared by 29 percent in the latest fiscal year to 1,700 — and people under age 34 account for most of them, according to city data.

The bulk of new cases of sexually transmitted diseases were in the 15 to 34 age range.

“It’s certainly been well documented that among adolescents and young adults, those who are sexually active tend to have multiple serial relationships or concurrent relationships. Within the context of unprotected sex, that could amplify the spread of disease,” said Dr. Susan Blank, a deputy commissioner at the city Health Department.

Re millennials and sex: my kid of that generation tells me that they're all on antidepressants and don't have the kind of sex drive that my gen had/has!

Re Osteria: I lived near there on E. 12th and marveled that they could try to class up that corner like that . Worked for a while I guess.

Only on EV Grieve kids, only on EV Grieve could a posting about the closing of a restaurant turn into a lecture about STD's. When I was starting out in the sixties, I resented people generalizing about my generation. I guess it is too much to ask people who post here to stop taking out their frustrations about young people by making outrageous generalizations of Gen Xers or Millennials.

The reason why Millennials are a part of the conversation on EV Grieve and have been for many years is because they are a big part of what has changed the Village and many other areas -- mostly for the worse unless you're a landlord -- over the past decade. Try going into StuyTown on a weekend and see the vomit and beer cans everywhere--insde the hallways as well as outside the front doors,. The Millennials who live there don't even know how to dispose of their garbage properly and leave it right outside of people's doors to rot. That never used to happen unless a tenant was mentally ill or a drug addict, and college students have lived there for years. Now after they graduate many still act like children. Hence, SantaCon.

Every generation has their own brand of bad behavior, but this one never wants to grow up, and uses bad behavior as a badge of honor. These aren't generalizations, they are facts. Ask any restaurant owner about Millennials and they wil give you an earful. They just want to drink, they dont eat, they want the newest fad food and are not loyal to the neighborhood places that we all miss now because they're mostly gone. Now Millennials are spreading STDs and having unsafe sex because they think AIDS can't kill them. (It still can, as many of my former friends can attest.) I guess they never heard of Hepatits C, which killed my cousin 's husband who had a wild sex and drug filled youth, and Syphllis can take years to kill you.

This behavior demonstrates that in spite of having access to more information than any other generation, many (not all) Millennials are not as smart as they think they are. It shows their inability to foresee consequences from their own actions, even when their own health is at stake. Now they don't want vaccines for ther children because someone smarter than them told them on Facebook that accines cause autism, and now we have the biggest mumps and measles outbreaks in years, especially in Texas where the anti-vaxxer meme has infected many alcohol addled brains. My hope is that Millennials will prove me wrong and grow up one day, but judging from their loud, drunken anti-social behavior every weekend night here in the East Village, it looks like Darwin has other plans for them.

Giovanni: Why don't you start a vigilante group and go out into Stuy town grab them, pull their pants down and beat them silly. I am so glad to know that you have it all figured out, how Ms eat, drink, have sex, get sick, and how nothing will kill them. Ridiculous gibberish on your part. Move on with your life. Three paragraphs of virulent hatred for people is surely a sign that you should be seeing a shrink (or is that too 1960s). I, too, get annoyed with loud people on weekends, rude people on the streets, people who are so self-absorbed that they think the world revolves around them, but I don't condemn in blind rage an entire age group. You should find an art therapist quickly. This post was about the closing of a restaurant and the opening of a new one.

Back: If you can read my T-Shirt, you are the resistance.

FYI the chef is now up and running at 57th and Lex with similar fare, but more upscale digs.

By the volume of reviews, it's a better fit up there and doing well.