I love you to gigabits: Pop the question, see your names on a LinkNYC kiosk 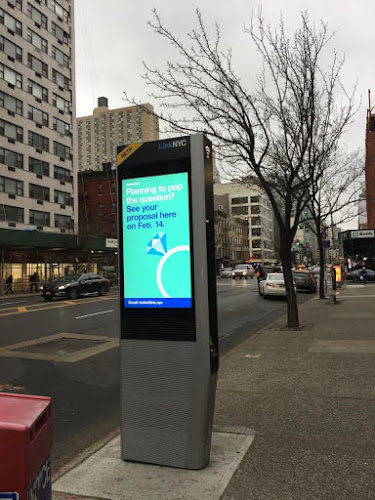 There's something new for romantics at LinkNYC kiosks, often a symbol of free love in the city.

As this photo via EVG reader Daniel shows, the kiosks have a notice asking passersby if they are planning to pop the question. (Presumably in the form of a marriage proposal.)

If you do ask your partner for his/her hand in marriage between now and early February, your proposal will appear on LinkNYC kiosks. (So keep it clean!) Reach out to hello@link.nyc for more info.

On the LinkNYC topic, the city reported last week that more than 1.04 million users have logged into the kiosks citywide.

The kiosks, which provide free domestic calls, Wi-Fi service, USB charging ports, among other services — "have seen an average of 40,000 new sign-ups and 4 million Wi-Fi sessions per week, according to the city," as DNAinfo reported.

In the past year, more than 53o kiosks have been installed. The city plans to install 7,500 kiosks in total. The first one arrived late in December 2015 outside the Starbucks on Third Avenue and East 15th Street.

They're missing half the market

If I got proposed to that way, the answer would be "NO!" How tacky. What's next, wish Mom a Happy Mother's Day on there? Dad a Happy Father's Day? New baby birth announcements? They must be desperate.

It takes a real unimaginative dorky douchebag to pick Valentine's Day to propose marriage. It could be argued that such cliched timing is actually antithetical to romance. VD is one of the worst occasions for any kind of sincere romantic overture actually. For thinking people at least. Also sad and shameless on LinkNYC's part.

can we go ahead and call LinkNYC a failure? or... are EVGrieve readers actually using it??? I am not and don't know how to

When was the last time the city washed those things?

Nothing says "You are the love of my life" by having your wedding proposal immediately followed by a Bud Light ad.

Oh. Oh! Uh-oh... Maybe that's a fancy nuvaring and the question is more... early termination related? I'm too tired to solve the Digital Sphinx's riddle tonight. Let me sleep on it.