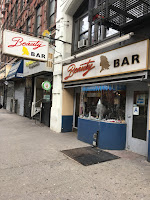 According to Town & Village, "police said that Maughn-Tulloch was ... doing lines of cocaine with a woman when he allegedly raped her."

Here are more details via DNAinfo:

While they were in the bathroom he made a move on the woman, but when she refused he pinned her against the wall, pulled down her pants, and raped her, police said.

Afterwards, Maughn-Tulloch remained inside the bar as the woman called police, they said. Police arrested him at the bar 45 minutes later, a police spokesman said.

The 30-year-old Maughn-Tulloch was arraigned on charges of first-degree rape. He’s currently being held at Rikers. His next court date is scheduled for Friday, per DNAinfo.

The Post reported that Maughn-Tulloch was already facing charges for drug possession and credit-card fraud.
Posted by Grieve at 11:35 AM

Jesus that is fucked up.I love Beauty Bar,always have a good time there.I hope she is ok.

That's messed up. What is it about 14th St that brings out the worst in some people? Even the Union Sw. Free Hugs guy got arrested. Speaking of assaults on 14th St, that Italian guy who was the Mike Pence supporter, the one who harassed those Asian woman and then pepper sprayed a bystander in the Coffee Shop near Ave A. was charged with assault and harassment and has a court date Feb 15. I wonder if he regrets his support for Trump now?

The fact that he was arrested 45 minutes later does not mean that was the police's RESPONSE time...there may have been an interview process and other steps taken prior to the arrest.