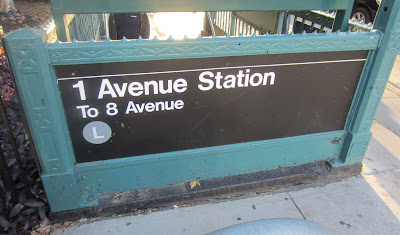 As you may have heard, the MTA announced last July that L-train service between Bedford Avenue and Eighth Avenue will shut down for 18 months starting in January 2019.

So with two years and 1,276 blog posts on the topic left before the full closure of the Canarsie tunnel's tubes (band name alert), the MTA and DOT have announced a series of jointly held interactive public workshops.

Per the MTA news advisory:

During the workshops, MTA and NYCDOT will provide information on the Canarsie Tunnel repairs and to solicit community feedback on possible alternate travel options during the planned 18-month closure.

Representatives from MTA and NYCDOT are also using the sessions to gain input for traffic modeling and analysis currently being conducted as service plans to minimize impacts are developed. Representatives will also be available to discuss construction impacts, ADA issues, and bus and subway service as it relates to the closure.

The public is strongly encouraged to participate in these workshops, which are expected to solicit meaningful input on alternate travel options for customers who will be affected by the repairs.

Community workshops have been designed to help the MTA and NYCDOT develop service alternatives and mitigation proposals tailored to the affected neighborhoods. Each workshop will be structured to allow public participation on a rolling basis as people arrive in order to solicit ideas from the greatest number of people.

The workshops are intended to help MTA and NYCDOT better understand preferred alternate travel options for impacted customers. They will also solicit community input on alternate solutions such as increased bicycle use, shuttle buses and ferries, and to generate other suggestions. The MTA and NYCDOT is also working with community boards, elected officials and the public to develop alternate service plans, which will be in place at least one year ahead of the 2019 closure.

Meanwhile, the shutdown is already off to a rocky start. DNAinfo reports that that the project cost "has ballooned to $16 million more than earlier estimates as the transit agency [ran] three months behind its planned timeline to pick a contractor for the job."

Will a car-free 14th Street make life more bearable during (and after) the L train renovations? (35 comments)
Posted by Grieve at 4:30 AM

I hope that as the conversation about the closing mounts, that some pubic official will raise the issue of reconstructing the entrances to accommodate physically challenged people--those in wheel chairs and those of us who are advanced in years and have trouble negotiating flights of stairs. That this is a real issue should be apparent to anyone who uses the cross town 14th Street bus--note the number of people in chairs, using walkers, and canes. An aging population deserves to be accommodated.

This shutdown period would be the perfect opportunity to renovate the 1st Av station and install an Av A exit.

Maybe if there were less workshops we'd have less MTA fare hikes? It's a disgrace that the people of this fine city let the MTA get away with these fare/salary increases. $3 fare coming to a stop near you.

They are supposedly installing an Ave A exit.

Agree with commenter @7:40am: The MTA needs to wake up and realize how many of its riders are senior citizens or people with disabilities. Bus travel is generally horrendous, but train travel is simply unavailable depending on what subway stop you get on/off at.

So much time & expense devoted by NYC to accommodating bike riders, but nearly zero acknowledgement that the population (including the bike riders) is aging and that even a young person could be on crutches after an accident or surgery and that person needs mass transit to offer a way to get around.

Or maybe the plan is just to make sure the senior citizens have to stay right where they are, and too bad if they want to get around. After all, NYC can't even be bothered with getting all the taxis handicapped-accessible.

I wonder if increased ferry service is possible? Probably not given the level of needed subsidy but I love ferries. Yes in all weather

Seniors tend to use buses, no stairs, seats up front and most able bodied people are willing to stand so they may sit. Seniors usually do not need to travel during rush hours and if they do they can set aside some extra time to get to their destination, I am assuming we are speaking of retired people not 9-5 folks. An elevator at the L 14th street and 1st would benefit families and people with small children and carriages the most. I always hold my breath as parents climb and descend stairs with baby in tow. I have many questions regarding the shut down such as does this mean no L for any part of Manhattan or will service remain 1st - 8th Aves?

@1:05pm: "Seniors usually do not need to travel during rush hours and if they do they can set aside some extra time to get to their destination".

You've made many assumptions in your comment, including that a senior citizen's time is worth less than your time, and that senior citizens are just lazing around all day with no deadlines to meet.

What if a senior citizen has a 10am medical appointment, and has to be on the subway or bus at 8:30am to be sure of getting there? Or would you like to ban seniors from using mass transit during rush hour, because they're just not important enough?

I imagine you'd also be surprised at the number of senior citizens who still work 9-5 (or 9-6, or 8-6) at a paying job. Further, many senior citizens volunteer at organizations where they're putting in a full work-day.

@1;05: Why not have the Mayor, following the lead of The D--issue an executive order banning anyone over 65 from traveling during certain hours of the day. You seem to have it all figured out. Seniors and people with disabilities should be hidden from view and from using public services when it might interfere with you.

Anon 11:30 AM:
No need to pit bikes against buses, and it's a flawed comparison. Buses - the MTA - is controlled by the state, not the city. While the city can build bike lanes and bus lanes (which they do), what they can do to improve bus travel is limited because the city does not control the MTA. This is why so many of us are pissed at Cuomo for bragging about wifi on the subway and pushing nonsensical, expensive projects like Airtrain to LaGuardia (via Flushing...) instead of investing in improving bus service.

@2:11 "You've made many assumptions in your comment, including that a senior citizen's time is worth less than your time, and that senior citizens are just lazing around all day with no deadlines to meet."

Lazing around? Their time is worth less? Where do I say that? My parents are in their late 80's I know when they schedule appointments and errands like shopping and I can tell you from experience the avoid the crowds pre and after work purposely.

"I imagine you'd also be surprised at the number of senior citizens who still work 9-5 (or 9-6, or 8-6) at a paying job. Further, many senior citizens volunteer at organizations where they're putting in a full work-day."

I am self employed and work from home so I pick and choose when I do my errands and it's me and the seniors buying food late mornings together along with stay home moms and dads. I guess we perhaps disagree what a "senior citizen" for me someone retired and over 65 and not interested in getting pushed and shoved in subway or subway platform.

Why can't they use the l as a know kinda shuttle? Go from 8th to 3rd - assuming A will be a access point. Least then there isn't really that much inconvenience.

@4:15pm: We DEFINITELY disagree on what "senior citizen" means! Being retired doesn't mean you're necessarily a "senior citizen" and age 65 is an arbitrary age, b/c many senior discounts begin as early as age 50.

Based on your comment, I guess you don't consider a 66-year-old who's working a 50-hour-a-week job in an office in midtown a "senior citizen"? How exactly *would* you characterize that person?? Especially given that, like many, that person intends & hopes to continue working full-time to age 70 or beyond.

Why does this comment section always devolve into people actively seeking to take offense at someone else's comment. Clearly, there was never any offense to senior citizens intended, yet people react as if personal insults were hurled their way. Why can't we kindly offer an opposing perspective? In this day and age it seems quite counterproductive to pursue nitpicky arguments with people who are generally of the same mind.

@abfus: I do think offense to senior citizens was contained in some of the comments, and reaction to that should not be a surprise. Many people in NYC - and commenting on this blog - ARE senior citizens.

There used to be some respect for the elderly, but now the attitude seems to be "get out of the way, you decrepit losers are slowing me down".

To senior citizens, NYC seems to be ALL about facilitating bike lanes for the young & hale & healthy - with no consideration given to anyone who doesn't fit that description. Those who are *not* going to be riding bikes deserve consideration, and senior citizens are pretty much terrified by bike riders already (and for good reason).

So why can't people mention that senior citizens exist, and matter, and deserve as much accommodation as any young bike rider or subway rider?

Unfortunately, there's no access to the rail yards or to any other subway line from those tracks. If something were to go wrong with the shuttle subway car, it would be stuck there until the tunnel reopened.

Airtain to LGA is hardly nonsensical.

@abfus
Thank you, I left comments which were taken as an insult by another reader yet I that was not my intention at all. Having elderly parents I completely understand what they and others their age must do to get from place to place. As the neighborhood gets younger, families and long time residents are forced out by the new big corporate landlords the we which remain have to deal with a quickly and radically different place. Many more people, more cars, a lot more bikes, a lot more dogs and let's not forget the late night noise from the explosion of bars. I don't plan on "retiring" if I can help it, I doubt I could stay here on what money I have saved and invested so I understand that many people continue to work even when the SS check arrives each month.

I was the person who posted 7:40 AM with the comment about starting a conversation about remodeling the stations with escalators or elevators. Somehow this thread went off on a tangent about when and how people with impaired ability or seniors should or should not use public transportation. My point was simply that making the subways user friendly for people (seniors, disabled people, mothers with carriages, usw) is a goal that public officials (who I know look at this blog) should be working towards. It seems to me that the time has come to upgrade our transportation system. A good point was made that the MTA is not controlled by Mayor DeB. So where is Liz K. on these issues? Missing in action?