Reminders: Community meeting about the former PS 64 is tonight 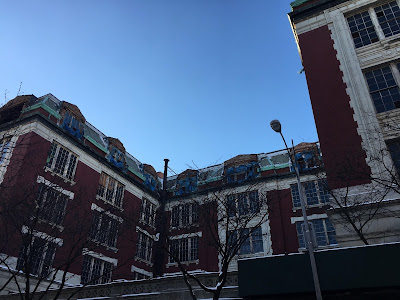 As we noted back on Jan. 9, plans continue moving forward to convert the former P.S 64 and CHARAS/El Bohio community center on East Ninth Street into student housing.

Developer Gregg Singer, who bought the property between Avenue B and Avenue C from the city in 1998, is reportedly pushing Mayor de Blasio's administration to remove a stop-work order that has been in place since 2015.

According to published reports, Singer has a signed lease with Adelphi University, and hopes to have students move in by the fall of 2018.

Here's more from Crain's in a piece published on Jan. 11:

City Councilwoman Rosie Mendez and other local officials wrote to Buildings Department Commissioner Rick Chandler in October, saying that the lease does not meet the "community use" requirement, because Adelphi would use only part of the building. The officials also objected to the university's position that dormitories count as an appropriate community use. In an October letter to Deputy Mayor Alicia Glen, Fisher argued that a dormitory would meet the deed-restriction requirements.

The disagreement touches a political nerve partly because the city's recent removal of a deed restriction a few blocks away allowed Rivington House, a nonprofit nursing home, to become high-priced condos. Unlike in that case, P.S. 64's deed restriction was issued by the City Council, and only the council may lift it. Singer is not seeking the restriction's removal, but the sensitivity stemming from the Rivington controversy and local opposition has kicked a Buildings Department matter up to the mayor's office.

Preservationist groups and other residents have been opposed to Singer's plans, and want to see a return of the landmarked building to use as a cultural and community center.

All this and more will be a topic of discussion during a community meeting tonight (first noted here on Jan. 9)... 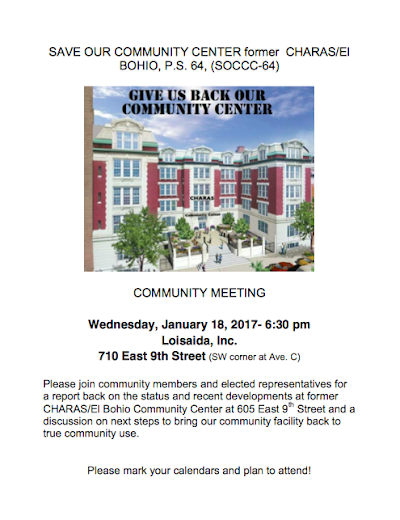 Previously on EV Grieve:
Community meeting set as dorm plans continue moving forward at the former PS 64
Posted by Grieve at 4:10 AM

And how many people on here turned up? ZERO!

I had every intention to go, I marked my calendar, and unfortunately a cluster$%&#$& prevented me from getting there.

Did anyone make it? Are there letters to write? I can do that.