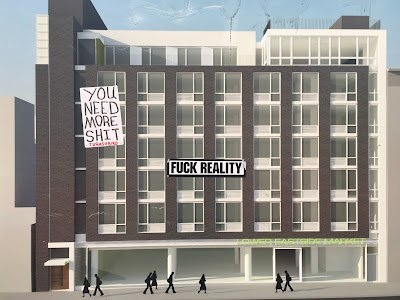 [Rendering on the plywood on 14th Street]

As we first reported last May, reps for the new development at 432-438 E. 14th St. are lobbying to receive a zoning variance for a 12-story building — four more floors than the area's zoning allows.

They'll make their case tomorrow afternoon before the city's Board of Standards and Appeals (BSA) to allow their planned development to be more than 50 percent taller than the zoning for the site allows. (Community Boards only have an advisory vote.)

Per previous reports, the site of the former Peter Stuyvesant Post Office between Avenue A and First Avenue "is burdened by a combination of unique conditions that result in practical difficulties in complying with the applicable zoning regulations." (Groundwater has been an issue at other nearby development sites, such as 500 and 524 E. 14th St. Those developers did not seek a variance.)

Crews have been in the pit in recent months dewatering the foundation... 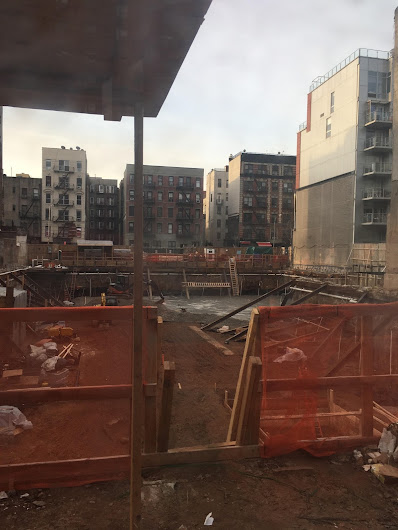 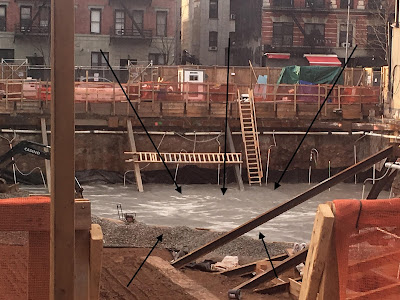 There is opposition to the expanded building from CB3 members, residents and community groups. Here's a statement via the Greenwich Village Society for Historic Preservation:

Like local Community Board #3 and many residents, GVSHP opposes the proposal for the building as woefully out of context for this East Village site. We also believe that the arguments for the variance, claiming a “hardship” based upon “unique circumstances,” are bogus, and would open the floodgates to a slew of oversized developments on sites throughout our neighborhoods with similar conditions.

GVSHP reps will be attending the meeting, and have distributed flyers with information about the hearing (find more details here)... 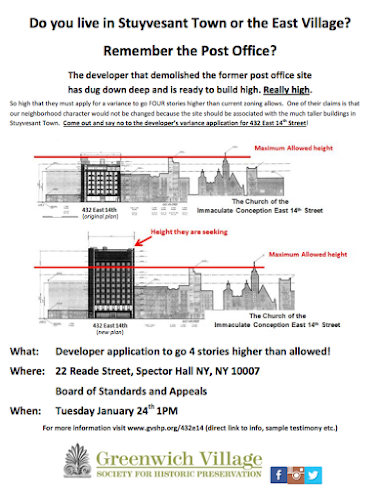 The current approved plans show an 8-story building with 114 residences (23 affordable, 91 market rate) and ground-floor retail. The 12-story version would feature 155 units, with 31 marked as "affordable." The residential entrance to the building will be on East 13th Street... while access to the storefronts will be on East 14th Street.

According to public records, the developers paid the powerful lobbying group Kasirer $80,000 last year to work on their behalf with city officials... 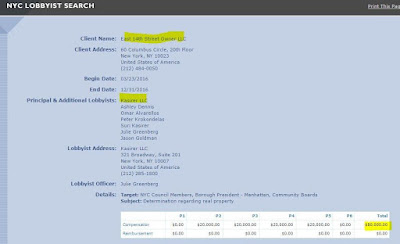 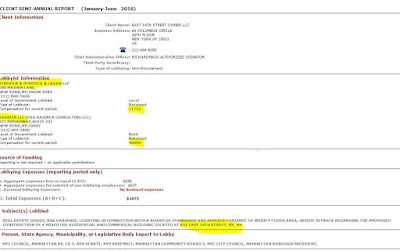 Reps for the developers gave this statement to Town & Village:

“We have been a part of the Lower East Side community for decades,” the statement read. “Very early in this BSA process, we met extensively with the community, heard their issues and in some instances made changes based on their comments and recommendations. We look forward to the BSA hearing and the opportunity to be heard on the merits of our application and remaining a part of this community for many decades to come.”

The Peter Stuyvesant Post Office, which had operated since 1953, shut down in February 2014. (Berenson has been the longtime landlord at the address.) The USPS is currently leasing the former Duane Reade at 333 E. 14th St. for retail services.

DNAinfo has a report from the meeting here. The developer's reps will be returning to the BSA to answer more questions on March 22. The BSA did not vote on the variance.

Because without lobbyists, how would the politicians know that you're planning on paying them off with campaign contributions. Is that the way it works? Lobbyists are the scourge of the political process.

Another developer seeking to steamroll a neighborhood. There's no way this monstrosity belongs in the here. This is just greed seeking to justify itself.

I think this is a fabulous idea. More people. More of a community. Win win. :)

The site conditions have been well known and mapped for over a century, and it's the developer's fault if they weren't built in to his financial plans. No excuse for a variance.

Here's an idea: Let them add the extra floors...only if all of the apartments are truly affordable and made available to local residents.

Won't happen but one can wish.

This is the East VILLAGE not East MIDTOWN. We have low-rise buildings here because we're a VILLAGE. Please keep the VILLAGE in EAST VILLAGE.

Thank you, City of New York for saying NO to this ridiculous zoning violation.

Wait, now we dont want more housing? We need as much housing as possible, if we want to keep rents down. Simple supply and demand...

I wish someone would explain what "truly affordable" means in today's world. The rule of thumb used to be that rent should be equal to one week's salary. That rule has no doubt been long ago abandoned. When commentators here speak about affordable what do they mean?

Housing is legally considered affordable when a household spends no more than 30% of its income on rent based on Area Median Income as determined by HUD. 2016 Area Median Income for NYC is $81,600 for a family of three. I'm assuming they mean one child not freaky but hey.

If you look at the Federal income distribution * for the East Village and the Lower East Side - no link handy sorry - there's a big lump at the bottom around the poverty line and then very sparse until around 100k. Which does fit in with my anecdotal street observations.

"Truly affordable" is a different question of course, one easier addressed in a society with a significant middle class.

* caveat: I saw that map a couple years ago but my guess is distribution hasn't changed significantly.

@9:49 is right and I don't doubt the developers knew the situation before they started this project. Now they're just playing dumb and banking on getting their way since a hole has already been dug. Screw that. If the underground stream is such a problem, perhaps this is no place to put a building at all.

You can help us with this by quickly signing the letter below. I live next door - this literally takes 30 seconds and would be GREATLY appreciated!

Where is all that water coming from?!! It looks as if they ran into a big old fashioned stream. Even if they divert the water...knowing water--it'll find some other basement to flood into. Is there anyone out there with the friggen' EPA????

Agree that the developer likely DID (and OUGHT TO HAVE) known about the water issue before they ever got underway. Hey, if they didn't do their due diligence, and thus made a bad business decision, it's not our job to bail them out.

As for truly affordable housing, I wouldn't hold my breath waiting for that.

@11:54am: "Simple supply and demand"? You think more apartments will "keep rents down"? You don't get it about housing in NYC, do you? The more free market they build, the greater is the pressure to illegally harass or try to evict long-term legit stabilized renters in other buildings. Developers are NEVER satisfied; they always want MORE. And the rents NEVER go down.

"Wait, now we dont want more housing? We need as much housing as possible, if we want to keep rents down. Simple supply and demand..."

Residential housing never followed the consumer model of supply and demand, it has been regulated by our elected officials since the days the first tenements. Government both local and federal have planned housing, provided money for it to keep the poor housed as well as the middle class. Sty-town is a great example of middle class housing, public housing wasn't always as bad as it appears today and without social programs to support those in public housing the problems of poverty go unchecked. If you let developers take away public land for high end condo's that land use is gone forever. If you approve development of a neighborhood and encourage small landlords to sell their working class housing by not providing tax breaks to maintain these buildings those buildings and blocks become luxury rentals. There once was a thing called urban planning in our city that role has been handed over to developers to profit at the expense of long term residents and their families. The city will soon be just for the "haves a lot" and nobody else. Immigrants will be blocked from living here do to the expense and NYC for the first time in it's history will lose the single thing that has made the vital city the world admires. More H&M stores will not do that, more fake NYC landmarks such as the Highline will not make NYC and inspiration. If you love this neighborhood and city please make sure your voice is heard and sign the letter someone has kindly linked to earlier in the comment section.

I have a bird's eye view of the construction site.
there is something not right with those photos showing so much water.
I see the site each day and have been watching with interest and it hasn't been any water pooling/flooding like is shown. maybe there was for one day and I missed it but everytime I look down there it is them just digging into dry soil.

I make a decent salary in advertising and am only paying 58% of my take-home pay in rent for my rent-stabilized place. I guess I should consider myself lucky? What a joke...

I mean, it's on 14th Street and across from Sty-town - 8 stories seems kind of short-sighted (pun intended), no? I honestly didn't think the mid-block zoning applied to major thoroughfares like 14th, Houston, etc.?

Signed. This has always smelled like BS. You don't gamble with millions as a developer. They knew all along.

The "huge" towers at Stuyvesant Town directly across the street are 12 stories. Would be fine for this addition to our community to be the same height as well.

I dont think that is water in the photo it looks like cement.

Water is a common condition on a site, hardly a singular condition that meets the legal criteria for a variance.

Think I read they paid $200,000 for the site in the 70s or 60s, so financial hardship is obviously untrue since they already made millions on this site, one of many they own.

The lobbyists involved tell you all you need to know.

Does anyone know if there has been a decision on this?