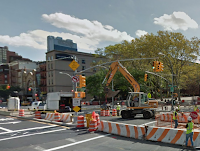 Anytime that you've tried to cross East Houston from Avenue A west to the Bowery these past, oh, six years, you've probably wondered, When, dear [____], will this construction ever end?

To answer that very broadly — sometime this year. Probably!

Anyway, one year later, word comes that the already-delayed project has a new completion date — summer instead of the spring.

The Department of Design and Construction is now in the final stretch of the years-long overhaul of the thoroughfare as workers prepare for the installation of a new water main near the Bowery intersection and the construction of a pedestrian island at Second Avenue, according to a DDC spokeswoman.

Officials initially anticipated a spring completion date for the work, but the department ran into delays due to interference with existing underground wiring while preparing to install the 20-inch water main west of Chrystie Street.

The East Houston Street Reconstruction Project newsletter (PDF here) also notes something about the addition of a "safety island" (no word on rents here) for East Houston and Second Avenue.

Image via Google Street View
Posted by Grieve at 4:20 AM

I couldn't care less... The flying cars will be here any day!

They have won. We no longer care.