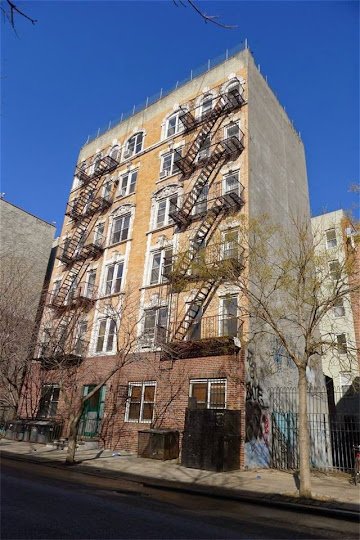 There is new ownership at 629 E. Fifth St., a building on the north side of the cul-de-sac between Avenue B and Avenue C.

And the new landlord's property manager, Jordan Cooper and Associates, has notified the tenants in the 24-unit building that they will need to move out at the end of their lease, but preferably sooner.

One current resident shared the letter from Cooper and Associates ... 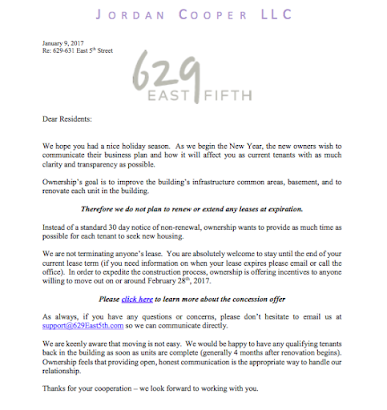 We hope you had a nice holiday season. As we begin the New Year, the new owners wish to communicate their business plan and how it will affect you as current tenants with as much clarity and transparency as possible.

Ownership’s goal is to improve the building’s infrastructure common areas, basement, and to renovate each unit in the building.

Therefore we do not plan to renew or extend any leases at expiration.

Instead of a standard 30 day notice of non-renewal, ownership wants to provide as much time as possible for each tenant to seek new housing.

We are not terminating anyone’s lease. You are absolutely welcome to stay until the end of your current lease term (if you need information on when your lease expires please email or call the office). In order to expedite the construction process, ownership is offering incentives to anyone willing to move out on or around February 28th, 2017.

We are keenly aware that moving is not easy. We would be happy to have any qualifying tenants back in the building as soon as units are complete (generally 4 months after renovation begins). Ownership feels that providing open, honest communication is the appropriate way to handle our relationship.

As the current resident said: "It's causing a lot of people to be displaced into an unrealistic rental market and creating more unaffordable housing in the East Village."

The building arrived on the market in April 2014. The asking price was $12.5 million. Per the listing at the time:

There are 24 residential units, all of which are Free Market. Of the 24 apartments, 13 are month-to-month, 6 expire at the end of April, 3 are currently vacant and 2 expire between May and July. The rents are performing at less than 75% of market and considering the building is fully deregulated, an investor could quickly bring the units up to market rents as the leases expire. Therefore, a gross annual income of around $930,000 could be achieved in a relatively short period.

Public records from November show that the building sold for $16.2 million. The LLC listed as the owner matches up to the address of Morgenstern Capital, run by Robert Morgenstern, co-founder of Stone Street Capital. The Luthien Group was the seller.
Posted by Grieve at 4:30 AM

If I may share my memories of this block. I moved into the building just next door from this one in 1982, I moved from my first NY apartment on 6th street which took me 10 minutes since it only involved carrying a mattress, a bag of clothes and some records. The empty lots nearby went through to 6th street and I feared taking that shortcut due to the syringes strewn about. The options to get out of this "dead end" were walk down to C and then head back towards B and head west. The other option was to cut through a paved lot which I assumed was a playground yet it never had children in it. There still is a large wall there behind the public housing which was built around 85'. Junkies would line up along the wall and one or two guys would handover various drugs. The "blue light" "green light" system was in place and everyone knew to scatter when colored light representing the cops were near. My building had a dealer just below me, the building's bathrooms were in bad shape due to constant leaks, I could see into the drug dealer's bathroom from mine. When returning home from work or a night at the clubs I often had to walk over junkies free-basing to get to my apartment, I'd greet the dealer's armed guard who held a sawed off shotgun. Despite this craziness I never had a problem until Mayor Koch put an effort to shut down the drug trade. This destabilized the system, the drug economy and the little petty muggers and thieves quickly took advantage of this and I got mugged for the first time.

If my landlord ever asked/pressured me to move out early, knowing me I'd probably dig my heels in pretty hard. Fuck you for asking! Fuck everyone!

Happy New Year. Now get out.

Anon. 10:48, thanks for sharing those great memories of another time, the same (but today another) place. Ah, the good old days, when life down here was certainly - interesting!

This is stone cold. 4:52AM, that perfectly sums it up. This is "gentrification" in action. Out with you! (Hold on to your rent stabilized apartment, everyone who is free market is getting blown away in the storm.)

I have an idea. Now that you know they want you out, stop paying rent and have the justice system take care of it. You might win in court. who knows?

At least you'll force these jerks to pay for servers and legal flunkies.

Certainly some units in this building are stabilized, no? If that's the case, tenants are entitled to a lease renewal.

Time to organize, know what your rights are as a tenant even market rate tenants must have some right to a renewed leased at a stated percentage increase?

market rate tenants have no rights

There are plenty in this city for tenants rights.

I did a little research online and it looks like unless your lease has a clause giving you the option to renew then a market rate apartment renter has zero rights. There may be a law regarding advance notice but I didn't dig that deep into it. Good luck to all involved.

I rekkon they could just squat.

It's unbelievable but market-rate tenants don't have the same rights as rent-stabilized, so these people can be evicted once their leases end.

This gives a small group of landlords and real estate developers total control over the prices of rents in this neighborhood and who can live here.

It is so fucking frustrating.

It's too late now but . . . if this situation is happening to you . . . and you can coax a majority of your neighbors to join hands . . . and you can find a bank that will underwrite you . . . it's possible to buy a building and convert it to coop and not only will you own a share of the building but your mortgage and maintenance may be very reasonable. In certainly situations, it's even possible to force the owner to sell to you (instead of someone else, assuming they are trying to sell). It's hard but . . . it is possible. It happens. Rarely, but once in a while, usually in smaller buildings with a friendly seller, renters turn themselves into owners. The largest hurdles are agreeing to do it with your neighbors and finding an underwriter. Why the city doesn't help with these kinds of situations is beyond me. It's a fantastic way to stabilize neighborhoods, provide reasonably priced housing, and end up with tax payers with a stake in their city. Sure, it's complex. Yes, the city might lose a few dollars helping with the paperwork and, yes, the city's loans might be slightly risky but there are so, so many upsides. I know it's fashionable to hate government but this kind of solution--encouraging coop conversions in various ways--isn't rocket science and it would put a real dent into our housing crisis. Who benefits? Nearly everyone. Who doesn't? Maybe a handful of developers. Crazy commie talk but . . .

The incentives they are offering are dismal. We're gonna give it a good fight.

The incentives they have offered us are dismal. We're gonna give it a good fight.

Wow this is exactly why we need to defend affordable housing. I hate to say it but these people really do not have any right to fight and stay. It's so sad.

After my building was brought by Icon. They even kicked out most of the stabilized tenants who were not up to the fight. Now the apartments are renovated luxury rentals.

I would stop paying my rent...what are they going to do evict you?

Wait! Where are all the people who usually bash Rent Stabilization now? Answer: getting kicked out of their market rate apartments by landlords like Javanka (that's Jared and Ivanka for those not paying attention to the tabloids). Market rate renters have no rights in this city when their leases run out. They are treated just like commercial tenants, only worse.

And this is exactly where StuyTown and Peter Cooper and many other buildings are headed in a few years--one by one they will start converting these buildings to condo. Once a building has enough market rate apartments, it's relatively easy for the owner to simply not renew all the leases and buy out any remaining apartments (or just let them stay and rot if they can't harass them out.) Then they can convert all the empty apartments to luxury rentals or condos and go to landlord Nirvana.

All those cheerleaders for eliminating rent stanlization have been doing is to help create more instability and unaffordability in the housing market. But they know that already, once most of them are probably real estate investors anyway.

Maybe if all tenants had banded together to demand more rights we could have avoided this mess, but market raters always had a chip on ther shoulder, jealous that they weren't paying the stabilized rent, and landlords were happy to exploit the division between market raters and rent stabilized tenants. Now they're all screwed.

But don't worry, maybe landlords like Javanka will have a change of heart and let people stay in thier homes. Just kidding!

I used to live in this building and have $$$ wrapped up in a security deposit they never returned to me. I'm convinced the link may not work, but is there any chance you can forward that letter on to me please? I will DM you on Instagram as well. My gmail acct is attached to the comment.