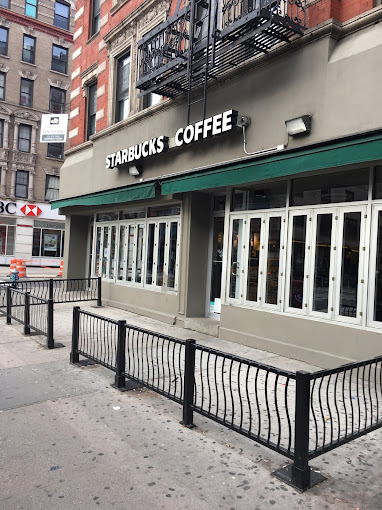 A little weekend reading... in case you didn't see the Starbucks headlines from yesterday.

The coffee chain reported disappointing sales growth on Thursday and partly blamed the “congestion” in its stores for prompting some people to leave without buying anything. Starbucks said the popularity of its mobile order-and-pay option, which was supposed to make getting a drink easier, has caused bottlenecks at the areas where people pick up their drinks.

CEO Howard Schultz, who is leaving that role in April to become executive chairman, said the issue has “created anxiety” among some customers.

No word on the number of people who just enter and exit a Starbucks to use the restrooms.
Posted by Grieve at 10:16 AM

Guess those people who leave without buying a drink know it isn't that hard to get a cup of coffee in this town.

Starbucks is nearing its expiration date, and a major consolidation in US retail no doubt on the way. Howard Schultz is probably stepping aside now so that he doesn't have to oversee the shut down all those unprofitable Starbucks stores due to his over-expansion. He admitted yesterday that their Teavana chain is basically a disaster. At least th batrooms are free, if you can stand te smell and get past the Crusties shooting up heroin and cab drivers who never flush. Its no wonder they shut down the bathrooms in the smaller stores where they are not required, and locking them up for use by customers only.

The next big wave of chain store closing stores is in the At the moment, Duane Reade is closing down stores all over the city now--they are shutting down a Canal and Broadway store that just opened in late 2015, and stores on 23rd and 3rd and one on 75th and Broadway are closing--all are in high traffic areas. A few weeks ago Duane Reade shut down all 10 walk in clinics in the city and are laying off 200 people as they close ther distribution center in Maspeth, Queens. Watch for several more DR closings in the Village soon, either on 3rd Ave or Broadway.

Who cares, you ask? This is a big issue for people on medications who rely on their pharmacies for life saving medicines.– many pharmacists are not certified for certain critical medications, and finding a new one nearby that is can be very difficult. If Duane Reade didn’t have so many pharmacies this would not be a big deal — we can order everything they carry online at much lower prices— but companies like this that are so deeply involved in people’s healthcare need to be more committed to helping their customers than to their own corporate profits. Just like Mount Sinai shutting down Beth Israel and selling it off to developers, it's profits before patients.

@Anonymous 10:40: Some $tarbucks are cracking down; the one on 1st and 13th, for instance, has refused to let me use the restroom without a purchase.

And @Giovanni: Walgreens is DR's parent company, so watch what Walgreens is doing to figure out DR's next move.

This just proves how much more entitled and snow-flakey people are becoming in general; oh, how unacceptable that one's coffee isn't available this instant.

It's also interesting to me that, as NYC gets more overcrowded, stores like Starbucks are implementing these "order ahead your stuff will be ready for you" apps - these apps supposedly "save you time" yet the apps are only masking the fact that parts of this city are beyond saturation level in terms of being able to get some tasks done in a timely way. Without the apps, the lines would have been longer ages ago.

PS: And I say this as someone who doesn't understand why anyone would stand on line for Starbucks coffee. Dunkin Donuts is more my speed - and they have their own app, but I don't notice if many people are using it.

@ScubaDiva Exactly right, after Duane read was bought by Walgreens everything changed, and the chain started going downhill in terms of service and selection, and uphill in terms of prices. Their new stores are much oo generic looking, and not as useful \ to shop in as the old ones. Now Duane Reade uses zone pricing, and some of their stores are much more expensive than ones that are just a few blocks away. These DR store closures could also be due to antitrust issues as Walgreens is trying to buy RiteAid for $17 billion, and the FTC is pushing back due to competition issues.

Now that the Orange Orangutan is in office who nows how many mergers he will approve, but if he opens the floodgates the competition will go down and push prices even higher. It's amazing how these chains pushed out the mom and pop pharmacies that were here for decades, and now they are closing down brand new stores, all to enhance shareholder value. What a sham.

I think there is a generation that thinks using a phone app is magic. Make a command and a genie will have your order ready when you are. That genie is an underpaid human that does not have the good fortune to spend $5? for a cup of coffee. (I have no idea since I refuse to buy corporate coffee).

Corporations like CVS, Walgreens are like sharks, they die the moment they stop swimming. Businesses that are not growing are dying, flat earning are the beginning of the end.

Maybe they see the price and think, Never Mind.

The real money in a modern drug store is not in the drugs, it's in the junk they sell. Big pharma makes the money on the drugs. The HMOs and Medicare/Medicad keep the prices down as much as they can. But the retailer takes the hit. Not the manufacturer.

All I read here is bitterness (no, not the coffee), jealousy, self-righteousness, and plain old nay-sayers. No matter what you think of the corporate structure and profit making priority of a big business like Starbucks, you can't deny the popularity of their model and their products. The mobile app is great and I use it almost every single day with only the smallest confusion taking place in a rare instance. The baristas know how to get it done....it is the customer who is often confused or more likely not paying attention to the world around them as they still have their heads stuck up their proverbial phones backside rather than take 2 seconds to figure out that their coffee is right in front of them...they just have to look the slip with their NAME on it. Then again, sometimes they are so lost they don't even know their own name...so there is not much help for them. These are the same people who cross the streets against the red ight with their head down on their phones talking, texting, searching for some unimportant piece of data. Heads up people.