This coming Monday, CB3's Landmarks Committee will review an application for a Certificate of Appropriateness for the new residential building proposed at 119-121 Second Ave. — the site of the deadly gas explosion site from March 2015.

Ahead of that meeting, CB3 has posted the 39-page application on its website. (PDF here.)

The materials include renderings via Morris Adjimi Architects of the proposed building... 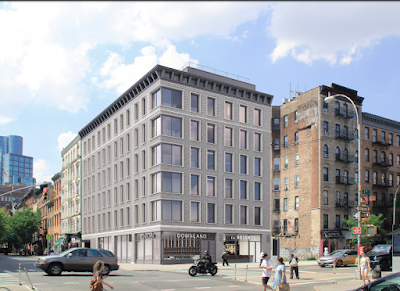 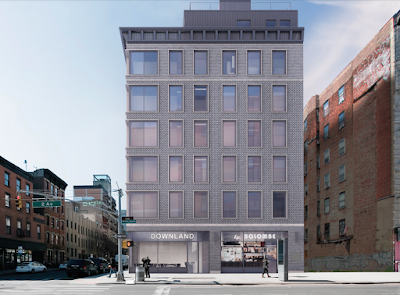 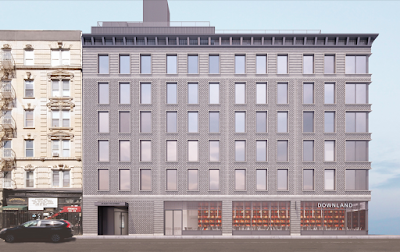 [View from along 7th Street]

According to the Nexus website, 119-121 Second Ave. "is a high-end condominium building ... with seven floors including 21 apartments and a retail space. Residential units are one, two and three bedrooms."

In a previously recorded transaction, Ezra Wibowo paid $6 million for the adjacent property at 123 Second Ave. A source told the Post in March 2017 that this was a long-term investment. "He’s not in a rush to build or develop."

The lot sits within the the East Village/Lower East Side Historic District. CB3's committee will hear the proposal before it eventually continues on to the Landmarks Preservation Commission. (The CB3 meeting starts at 6:30 p.m. on Monday at Grace Church School, 46 Cooper Square.)

The meeting notice arrived on the fence at the property yesterday... 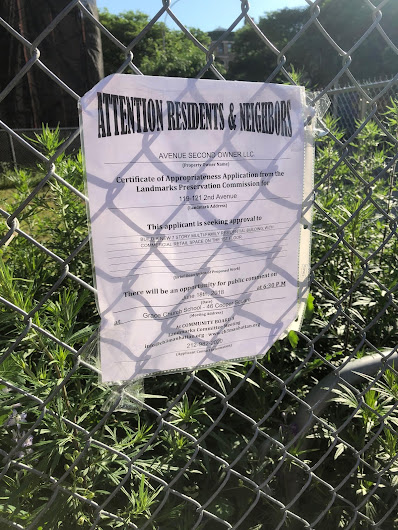 Moises Locón Way and Nicholas Figueroa died in the explosion on March 26, 2015. The defendants in the case, including Maria Hrynenko, the former owner of No. 119 and 121, are expected to go to trial in September.

Soil testing underway at the 2nd Avenue explosion site
Posted by Grieve at 4:30 AM

Another high end condo? How many do we need? It looks so bland we should call it the Fluffernutter building. Or maybe Blandification House.

Meanwhile, three years later, Maria Hyrnenko and her cronies are still awaiting trial, with no word on what ever really happened to her son Michael, who ran out of the building right before it exploded, ony to die mysteriously last September at the age of 31. Even his obituary on his funeral page quickly disappeared once word got out to the media. What all the secrecy? We know that Michael was facing a DUI charge from the previous February. We know how Moises and Nicolas died in that gas explosion. The circumstances of their deaths was no secret. The last thing thay probably saw was some guy running out of the sushi restaurant before the building exploded, and not warning anyone about the danger And then it was over. Why does Hyrnenko’s son get treated so differently? Oh I know, to protect the good name of the Hrynenko family. What a joke that is now, but no one is laughing.

Besides the (gray again?) color of the bricks I have to admit that I think is design is a rare case of a new building trying to respect the architectural heritage of the neighborhood. Well done.

It would be better as a community garden or a park which even though it's weeded out it already resembles one instead of a giant foreign money laundering safety deposit box building.

This building looks nice and actually fits the aesthetic of the neighborhood. And it's much better than a vacant lot.

What I like about the new building. 6 stories, is height and size appropriate for the block and what it replaced. The cornice, the saving grace to incorporate the past into the present. If not for the cornice, I would be thumbs down. What I don't like. The color, dreadful, must be a tease.

I like it! Much better than the apt building with the target. It's a new building, but fits in well. What are they supposed to build there besides a nice apartment building? What do you expect them to do?

Well, if they actually include two storefronts along the avenue that would be nice. These newer buildings often have no commercial space or one big one. The residential entrance is smartly located on 7th.

Still baffled how this hasn't gone to trial yet.

That is BLAND you-could-be-anywhere look.

How about using some reddish bricks for color & to try to fit in with the other buildings in the area? Or is that too much for a developer to stoop to?

I guess it could be much worse. T H E best architectural integration of a newer building into the neighborhood in my view is still the Ukrainian Museum on East 6th Street.

I like it. It at least looks like it fits, rather than the glass monstrosities that have been popping up all over Chelsea.

The new building is just as ugly as it's neighbors. So it fits really well into the neighborhood. But what bothers me most is the empty lot next to it. I don't understand why the two owners couldn't work out a deal for 1 building.

The height is limited they are still the highest with the mechanicals absurdly piled high, to make for decks. Still a chance to have the lot next to this become a memorial park....

Now all we need is the promise that all the tenants who were displaced by the explosion can move back into this building, at affordable rents.

Hey, a person can dream, can't they?

I appreciate that if it's gotta be a luxury building, at least it's a place people can buy into so they are settling in and going to stay in our neighborhood. To that end, I wish it were a coop instead of a condo so that more apartments would be owner occupied and not just investment vehicles.

I'd much rather see something more affordable or (even better) see the people who were displaced by the explosion resettled into the new buildings. When I checked out the prices on that new building with the Target, the market studio apartment was more than my mortgage and fees for our 2-br in a coop building.

This is the George W. Bush argument for buildings. "Could be worse, like Trump!"

rich red, earthy bricks would blend better and an altar to honor the 2 men who lost their lives in the lobby so people will ask about it and be pointed to the plaque that tells the story.

Yes red bricks please! And a small commemorative garden/planter built into the front with a plaque.

Enough with the gray brick! Please!

The previous tenants! Affordable rents, no thought for justice or those who died thanks to negligence! Too sad and so greedy. Nothing new.

What disgrace. Where is Hoylman? Harvey Epstein do something. Cooper Square? DeBlasio should be impeached for this Rivington House NYCHA...Somebody step in and do something. Take a position.