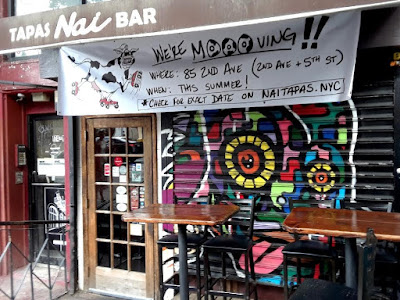 Nai Tapas Bar has announced its plans to move this summer from its spot of eight years at 174 First Ave. between 10th Street and 11th Street... 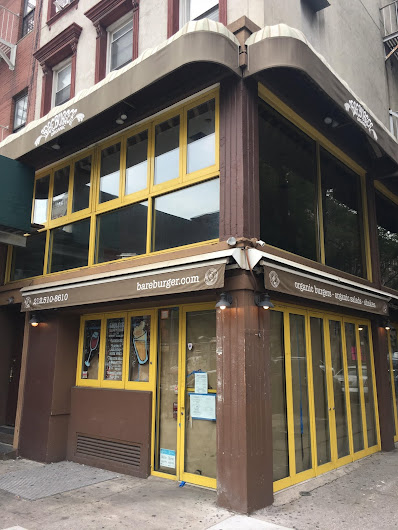 ... to 85 Second Ave. at Fifth Street, the former home of Bareburger.

The owners of Nai Tapas Bar will appear before CB3's SLA committee tonight for a new liquor license at Second Avenue. (You can find their questionnaire online here.)

There isn't any mention on the questionnaire if Nai will continue on with their live flamenco shows, which happen twice a night on Thursdays and Saturdays. As one block association leader said, "The show is amplified, and in its current form could be disruptive if performed on the second floor of 85 Second Ave." According to the Nai Tapas Bar questionnaire on the CB3 website, "noise will be carefully monitored." (This comment is not specifically referencing the flamenco shows — rather the overall ambiance.)

Moving day for Bareburger
Posted by Grieve at 4:20 AM

Does anyone else remember when this corner store was Kasbah Antique Clothing? Granted, it was 30 years ago, but there are readers here who even remember the Five-Spot, so I bet I'm not the only person who still has clothes from there.

I wish there was more flamenco in the city, of the quality that you find in Spain. You get singing, dancing, and guitar playing all in an evening.

Yesterday the sign on the front door said live flamenco. I love flamenco and support dance but they will undoubtedly leave all those big windows open to attract patrons. There are so many noisy bars in the neighborhood already it sounds like a huge party outside every Thursday to Saturday evening, and I am on the 7th floor. Community Board 3 has already acknowledged at a monthly meeting that all of the EV is over-saturated with liquor licenses, unlike their website which claims only a few areas are over-saturated. Why is this not mentioned on their site? Why are new bars allowed in the neighborhood?

Kasbah Antique Clothing? Absolutely remember. From back in the days when people were frightened of that end of Second Avenue. Oh happy, no noise, no sidewalk cafes, no crowds, no bro culture, no predatory capitalism wiping out a truly diverse neighborhood days how I miss you.