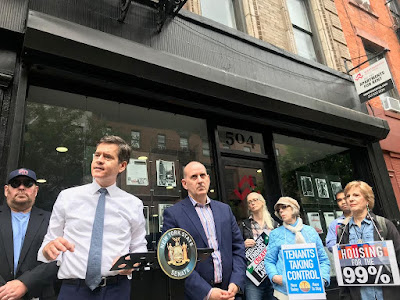 State Sen. Brad Hoylman, Assemblymember Harvey Epstein and various tenants and advocates were present at a press conference outside the office of Westminster Management, a Kushner Companies subsidiary, on 12th Street between Avenue A and Avenue B. There, they discussed the legislation, which directs the New York State Department of Finanical Services (DFS) to collect data on financial institutions that lend to property owners with the intent to displace current tenants.

Similar to the subprime mortgage crisis of 2008, lax underwriting standards and a general lack of transparency have allowed speculators and real estate agents to secure outsized mortgages with very little discretion and oversight. Owners use these loans to make purchases based on unrealistic projections of rising rents, and in turn have difficulty paying the mortgages.

Building owners — anxious to recoup on their hefty investments — often resort to abusive and exploitative tactics to drive rent-regulated tenants out. These abusive practices, known as predatory equity, are best-exemplified by figures like Steve Croman and Jared Kushner.

In the fall of 2015, after the Daily News reported that the state was investigating Toledano for tenant harassment at 444 E. 13th St., he received two loans totaling $124 million from private equity firm Madison Realty Capital to buy and renovate a 16-building East Village portfolio.

Per The Real Deal in an article last July:

The leverage on the deal — which clocked in at 128 percent compared to the typical 50 to 65 percent on a New York City multifamily deal — raises questions about how culpable lenders are in perpetuating harassment. In short, are they turning a blind eye when their borrowers too-aggressively push to turn rent-stabilized apartments into luxury units?

Pressured to generate income from the buildings to pay off his loans, Toledano reportedly attempted widespread buyouts. And many of the tenants at the buildings accused him of harassment.

"No longer can we allow landlords like Kushner, Croman and Toledano to force our neighbors out of their homes in order to make a quick buck," Hoylman said in a statement. "We demand that New York State investigate the practice of predatory equity so we can take the necessary steps to protect rent regulated tenants from harassment and eviction." 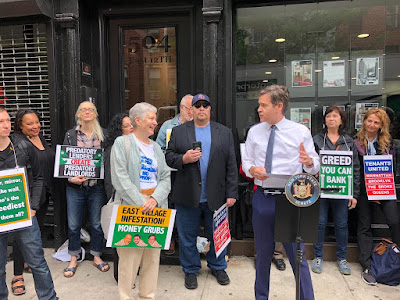 Said the recently elected Epstein: "This legislation will bring us closer to stopping the practice of predatory equity before it starts the cycle of tenant harassment and displacement that has become all too familiar in our city. Bad actor landlords and scheming financiers should take note: your days of destabilizing our neighborhoods with your shady business practices are numbered."

Croman was released from jail on Friday after serving eight months of a year-long sentence for fraud.

Previously on EV Grieve:
Report: Raphael Toledano files for Chapter 11; $145 million deal for EV portfolio is off the table

Raphael Toledano tenants take to Midtown streets to speak out against their landlord and his lenders
Posted by Grieve at 4:26 AM

Now all they have to do is to stop the AirBnB abuse, the illegal rent-stabilized tenants (illegal sublets, high wage earners, part-time residents), and make landlords responsible to maintain empty buildings, units and store fronts.

So the landlords aren't going to get $1million in their mortgages for use in clearing out the building of long term tenants? Like Icon Realty got with their mortgage on our building from Signature Bank? Once all the banks, including Signature started getting pushback Icon just went to other banks and Signature hires Barney Frank. From The Hill:
"Former Rep. Barney Frank (D-Mass.) announced Wednesday he is joining Signature Bank's board of directors.

The former chairman of the House Financial Services Committee was instrumental in drafting the 2010 Dodd-Frank Wall Street Reform law, which shares his name.

The pairing seems odd, given that Frank has frequently worked for more banking regulations often opposed by the industry.

"As a commercial bank catering primarily to privately owned businesses, Signature Bank knows firsthand the importance small business plays in the health and vibrancy of our nation's economy," Frank said in a statement. "I am excited to be part of all this in my new capacity as board member and in working with the other directors and management."

The New York-based Signature Bank has $28.6 billion in assets."

From the Real Deal quote: " ... raises questions about how culpable lenders are in perpetuating harassment. In short, are they turning a blind eye when their borrowers too-aggressively push to turn rent-stabilized apartments into luxury units?"

Uh, YES! Yes is the answer! And, BTW, why is this even a question, given that the answer is obvious af?