A record payday for an East Village walk-up co-op 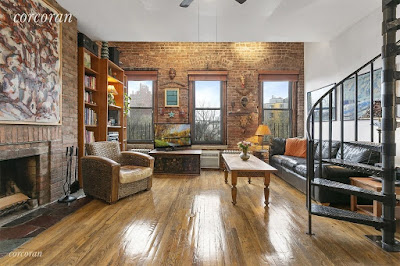 A co-op on the fifth floor of 541 E. 12th St. went into contract for more than $1.9 million last month after a bidding war with seven offers topping the asking price less than three weeks after it was listed, The Wall Street Journal reported. (The article is behind the paper's paywall.)

According to data from Corcoran, this penthouse apartment at No. 541 between Avenue A and Avenue B is the third-highest priced sale for a walk-up on the fifth floor or above in the East Village. In addition, it is also the most expensive sale of a co-op unit, the Journal reported.

No. 541 was boarded up and abandoned in 1986 when the seller of the penthouse and a group of friends who lived in the neighborhood bought it from the city and turned it into a co-op. They paid $380,000 for the five-story building and spent about $600,000 renovating it and moved in.

The sellers will be moving to a second home they own on Long Island while the buyers already lived in the East Village, per the Journal. (Another co-op in the building is on the market for $1.15 million.)

Meanwhile, a duplex penthouse on the sixth floor of a walk-up at 211 E. Third St. between Avenue B and Avenue C "will test the limits of high-floor walk-ups" when the four-bedroom, four-bath residence hits the market for about $5.5 million.

The article notes that walk-ups are becoming more desirable:

Despite the stairs, higher floors often mean more light, less street noise, better views, a chance to keep fit, and a lower price per square foot, brokers say. And those apartments have become more palatable in the age of grocery delivery and e-commerce, as consumers shop more online and don’t have to lug items up the stairs.

Email ThisBlogThis!Share to TwitterShare to FacebookShare to Pinterest
Labels: co-ops

They could have gotten more if they had done something to the walls. Bare brick is becoming passe.

"Penthouse" ... hahahahahaha! There's a sucker (or in this case, a set of counter-bidding suckers) born every minute.

I'll have to inform my friend who lives on the 6th floor of a walk-up that he's been luxuriating in a "penthouse" all these years; he has no idea!

If the Wall St. Journal believes the broker-babble inanity about walkups becoming "more desirable," then perhaps they'd like to buy a used bridge I have available for immediate sale. It's in triple-mint condition and has a lot of fresh air and light! And paving!!

I live on 12th Street. Not in a penthouse but on the top floor, and believe me nobody brings anything up the stairs to me. Not FedEx, not UPS, not USPS. They drop it in the lobby and run.

Don't the stupid spending tenants have to lug the deliveries up the stairs anyway? The pitch about getting exercise is something some mother would say to her kid that's getting a little paunchy.

But then I remember what demo these real estate hustlers and the mayor and the deputy mayor for housing they own and command are pandering too. They expect everything to materialize by pressing an image on their phone screen.

Actually—another top-floor dweller here—I'd like to add that since it's a tenement, I got a delivery box at East Village Postal several years ago for any deliveries I'm expecting; I don't trust no one.

I do like the view; I have a 24-hour view of the Empire State Building from all windows. Most of my neighbors—in this building, anyway—can't claim that.

If you pay millions of dollars to live on the top floor of an East Village walk up, you’re not living in the Penthouse, you’re living in the Spenthouse.