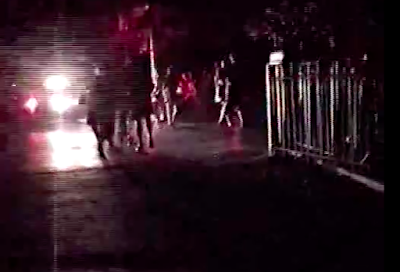 Today (and tonight!) marks the 15th anniversary of the great Northeastern blackout of 2003, an outage that affected 50 million people in parts of the United States and Canada. (Read more about the NYC anniversary at Gothamist and Quartz.)

Below is a video my old friend GammaBlog published on the fifth anniversary in 2008.

On the muggy evening of Aug. 14, 2003, GammaBlog took his compact VHS camera out on the streets of the East Village, shooting footage in Tompkins Square Park and St. Mark's Place, among other (darkened) streets.

Here's more about the 21-minute video...

Much of the tape consists of a dark blurry mess as the camera searches for something to focus on. But I did manage to extract some interesting video and audio. And though the walking footage may make those susceptible to motion-sickness nauseous, I think it does capture the spirit of the night. I combined this with recent interviews [2008] in Tompkins Square Park, where I asked people to tell me their 2003 Blackout stories.

Email ThisBlogThis!Share to TwitterShare to FacebookShare to Pinterest
Labels: 2003 blackout

I remember that first nite like it was yesterday.

It’s funny how everyone remembers the 2003 blackout fondly, but how traumatic the Sandy blackout was for most. Perhaps the good weather and shorter duration made it more like a party, while Hurricane Sandy with all the water damage, bad weather and much longer blackout was more like an end of the world event