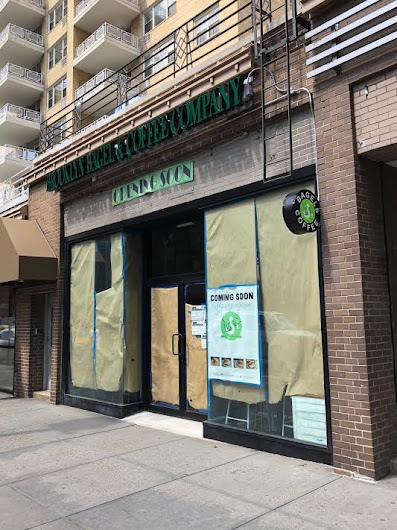 Way back in April 2017 we spotted the signage over on Eighth Street just west of Broadway for an outpost of Brooklyn Bagel & Coffee Company... coming in the fall of 2017.

As we wrap up the summer of 2018, the shop is ready for bagel business. They announced on Instagram that they open next Tuesday (Sept. 4!) here at 63 E. Eighth St.

Despite the name, the 16-year-old company has three locations in Astoria, one in Chelsea and zero in Brooklyn. You can find their menu, which includes a variety of sandwiches, soups and salads, here.

The "Brooklyn" naming scam is everywhere, I've even seen place in Sweden using it.

Brooklyn's name was taken from a town in the Netherlands. Like remember when The Netherlands owned New York? So maybe the owners are from there.

Also, I do like the outlet in Cheslea and personally prefer it to Murray''s Bagels.

OK, so they’re not from Brooklyn, but do they toast?

That place in Sweden was named after Brooklyn and they had donuts called "Williamsburg". Yes collusion.