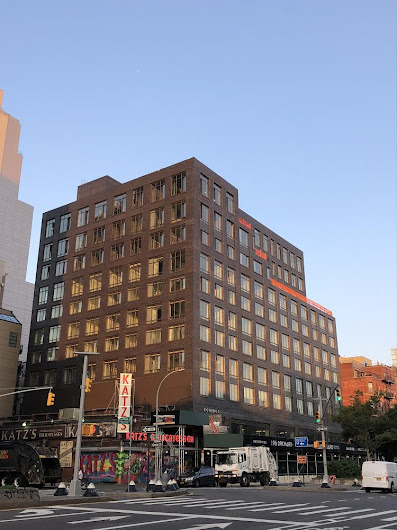 The neighborhood is getting another big-box retailer with the arrival of Marshalls next month.

The off-price sellers will open on the East Houston Street side of Ben Shaoul's Katz's-adjacent condoplex between Ludlow and Orchard streets.

According to the Marshalls website (H/T EVG regular IzF!), this location — the seventh in Manhattan — opens on Sept. 27... 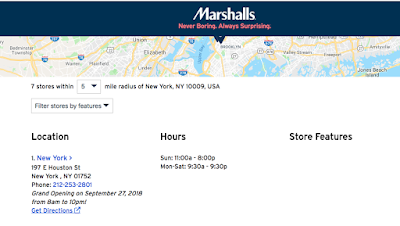 Back in May, BoweryBoogie reported on the rumor that a T.J. Maxx was slated for Shaoul's luxury building, constructed in part with hand-laid, gilded-bronze brick imported from Cadaqués. TJX, the parent company of both Marshalls and T.J. Maxx, apparently changed up brands for this space.

The 11-story, 94-unit building, officially 196 Orchard St., has units ranging in price from $1.075 million to $5.995 million. A three-level Equinox Fitness center is the other retail tenant here. (The Equinox branding recently arrived...) 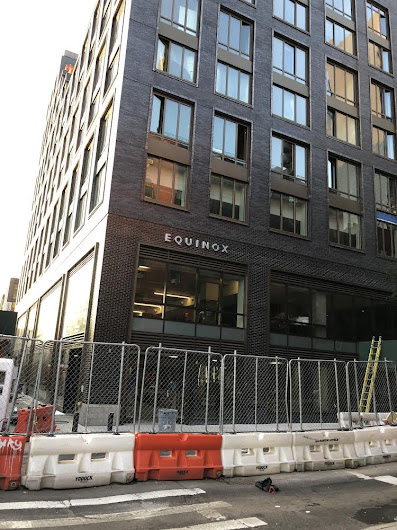 Katz's is now the last business on East Houston between Ludlow and Orchard
Posted by Grieve at 4:31 AM

My heart just sunk. The Marshalls in Chelsea is close enough.

Screw you suburbs, we have everything you have now. Target, Nordstrom Rack, Marshall's. Well everything except the fresh air, open spaces, clean streets, peace and quiet. In terms of retail though, we are all set!

The Houston St. Horridor will soon look just like the one on 6th Avenue, complete with giant buildings and mega chain stores like Burlington Coat Factory, Bed Bath & Beyond, and Old Navy, who carry everything you could possibly need. The only thing missing is a sense of community and character.

Gee, I hope that Katz’s Deli is happy that they sold those air rights now.

The EV is now bookended on the north and south by Target and Marshall's. Good for consumers who need what they sell and everything, but man, this place feels so different now. It's really a lot like everywhere else, USA. Can't even walk the streets and reminisce as just about everything from the old days is long gone. Veselka and B&H is all that's left.

11:02 Block Drug, the Indian spice store on 1st Ave, Porto Rico Trading, and Russ and Daughters too. That is all that is left. Cant think of any others. All the sparkle is gone.

Ugh why can't they just stay in midtown

A Marshall's downstairs definitely seals the deal when you're trying to sell someone a $5 million condo. Well played!