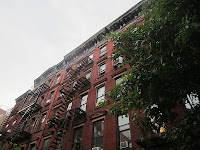 According to published reports, the Department of Buildings (DOB) yesterday fined Kushner Cos. $210,000 for falsifying dozens of permit applications at 17 properties they own, including in the East Village.

As The New York Times first reported, the DOB cited Kushner for 42 violations in which it submitted false permit information in those 17 buildings, "where many of the tenants were protected from steep rent increases and eviction."

Landlords are required in New York City to disclose whether tenants in their buildings are rent regulated to obtain a construction permit. This requirement is designed to safeguard rent-regulated tenants from harassment. Unscrupulous landlords sometimes push out rent-protected tenants so they can sharply increase rents on those units.

A DOB spokesperson told The Real Deal that "the falsifications were a matter of not disclosing the existence of rent-stabilized tenants." Among the properties: 331-335 E. Ninth St. (pictured) and 211 Avenue A.

In a statement to TRD, the Kushner Cos. blamed the misfiled paperwork on a third party. Per that statement: "No fines were assessed against the company [yesterday]. There were some violations issued for paperwork errors of the same type identified back in March and as we noted then, the company relied on third party consultants for the preparation of these forms and if in error they have been corrected or will be. In no case did the company act in disregard of the safety of our tenants."

The Associated Press first reported in March about the Kushner Cos. allegedly routinely filing false paperwork with the city declaring that it had zero rent-regulated tenants in buildings it owns when, in fact, they had hundreds.

Jared Kushner, the son-in-law of President Trump, resigned as head of the Kushner Cos. after joining the White House as a senior adviser in 2016. His father Charles Kushner is currently running the company. The published reports note that the false applications were filed while Jared was at the helm.

At 172 Rivington Street, for example, the Cohen group indicated that there were no rent-regulated tenants in the 20-unit building, after the company purchased it in October 2011 for $2.1 million. But records indicated that there were 19 protected tenants there, but only 11 remained after the Cohen group sold the building three years later for $10 million.

As the Times noted, neither Cohen nor the Kushner Cos. have been cited for tenant harassment.
Posted by Grieve at 4:00 AM

Email ThisBlogThis!Share to TwitterShare to FacebookShare to Pinterest
Labels: Jared Kushner, Kushner Cos.

I need to hire me some third-party consultants that I can blame for every mistake I make.

Jared Kushner has bigger things to worry about these days than a slap on the wrist fine from the lowly DOB Paul Manafort was found guilty on 8 counts of tax evasion and fraud, and he faces the rest of his life in jail. Michael Cohen, another EV landlord, pled guilty to eight felony charges, faces up to 6 years in jail, and is now flipping on the Trump crime family. Rumor has it that Roger Stone and Don jr are the next ones to be indicted, perhaps as soon as this week. Lets face it, between Kushner, Cohen, Toledano and Croman, the real estate industry just doesn't attract the best people.

They got fined pocket change, and even that is tax deductible.

It's not even a *large* cost of doing business. It's just a small bookkeeping entry.

Throwing people out of their homes? No biggie.

Wow and this is the kind of person running our government at its highest level. As with most white collar criminals no repercussions for lying, cheating and skirting laws.

Typical cost of doing business in the honored US tradition of predatory capitalism. Poor people be damned as long as you get yours. Looking forward to the revolution.

11:28am The idea of a revolution in this country doesn't bring to mind any ideas or solutions about justice or balance. All I can think of is nutjobs running around with automatic weapons.

Croman and Terrance Lowenbrat at Icon Realty were cited for making the same "third party" boo boo recently. Make no mistake; these guys know exactly what they are doing. $$$

They should have to pay back every tenant they illegally evicted, then sell the buildings to the tenants.

Thats about 10 g's and change for each building they criminally lied about. The only repercussions were the destroying of tenants rights to be able to afford to live in NYC and the trauma inflicted by their environmental and psychological damage from the weaponizing of gut renovations and dubious but persistent litigious harassment.