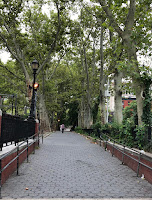 A 23-year-old homeless man, identified as Arturo Valdez, was fatally stabbed in Sara D. Roosevelt Park on Chrystie Street yesterday afternoon in a reported feud over the drug K2.

According to the Daily News, the suspect, Larry Fullewellen, 70, was arrested last evening at Port Authority. Fullewellen, who was still carrying a bloody knife, was charged with second-degree murder.

"This used to be a nice park," one witness told the Daily News. "The young kids come out here and play ball. They’re not thinking about K2 or murder."

The Lo-Down has more details here.
Posted by Grieve at 9:12 AM

That park has become a disgrace. I go there to sit on the benches and watch the bicycle polo games or the Chinese practicing martial arts but the seating areas on the benches are full of homeless people sleeping or drinking alcohol and smoking marijuana or K2 and leaving their garbage all over the place. Forget about going there after dark all the garbage that is left there feeds a huge rat population in the park. I also never see any police officers or park enforcement officers patrolling that park to enforce any park rules.

K2 is the crack of the 21st century. When pot is legalized, this vile poison weed is going to spread like wildfire because of the taxes and markup that will drive the price of pot up so it won't be affordable for the poorest people.

But like crack, k2 will crossover to a higher end market just like fentanyl-laced heroin because of the chemically enhanced bigger high it causes.

After tiring of looking at all the weeds, broken water fountains and dog poop everywhere in East River Park, I biked over to Domino Park yesterday. It’s like Disneyland, everything is so clean and perfect and new you’d never know you were in Brooklyn. I tried the tacos and margaritas at TacoCIna, Danny Meyer’s taco stand with the neon sign thats so big you can see from the moon, and it was pretty great. The new apartment buildings over there look like they were transplanted directly from Miami Beach.

Then I took the nice air conditioned ferry with the curated beer and wine bar and big screen TV back to Wall Street, and biked though Battery Park City. I saw geese feeding on the lawns and the ducks relaxing in the fountain, and once again was struck by how much nicer everyone else’s parks are than our own. Even the birds like it better over there.

Sarah D. Roosevelt (the D is for Dead) is such a disgrace, but what do you expect? It only serves the local Chinese residents, not the real estate industry. Whoever said “This used to be a nice park” must have lived there a hundred years ago.

They showed a movie in that park a few months ago as part of the Films in the Park stuff going on...I went only to see how many crackheads and creepers would react to people sitting there with wine coolers on the pavement at 10pm. It was bizarre. Maybe 12 people showed up to see the film with about 30 people laughing and peeing in public and smoking crack and whatever else. Family friendly!
They tried!

In the same afternoon, I saw a homeless man shoot up on a park bench and another man spew bright green vomit all over a different park bench. Why can't the city do anything about what is going on over there? I was going to take my kid to soccer lessons there but after I saw that, I decided against it.