Sen. Hoylman speaks out against use of Monsanto's weed killer Roundup in New York 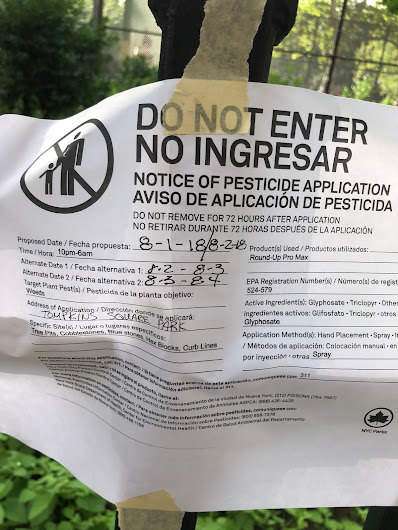 The jury ordered Monsanto — now owned by Bayer — to pay $289 million in damages to a school groundskeeper who got terminal cancer after using Roundup, one of the world's most popular weed killers. (A reported 4,000 other people are looking to sue the weed and seed maker for similar allegations, per Fox News.)

"Justice has partially been served in California, but there is no respite from the harms of glyphosate until we see an outright ban. New York deserves better. That is why I sponsor legislation in the state senate to fully ban this harmful chemical and properly study its effects. The Senate should act on this vital piece of legislation come January to protect the health and safety of New Yorkers."

As I noted at the beginning of the month, several residents were angry after spotting flyers in and around Tompkins Square Park offering "notice of pesticide application."

Park workers were going to spray using Monsanto's controversial Roundup Promax. According to readers who had contacted the Parks Department, officials responded that they had cancelled this application, and would not use it in the future in Tompkins Square Park.

While weed killer with glyphosate isn't used in Tompkins Square Park, published reports have shown that it is applied in other Parks and green areas in the five boroughs.

Sen. Hoylman carries two bills in the state legislature that would both ban the use of glyphosate outright (S126) and put a moratorium on the sale and distribution of the chemical until its effects are properly studied (S127).

In 2015, the IARC, the World Health Organization’s cancer agency, stated that glyphosate was "probably carcinogenic to humans." However, in May 2016, Glyphosate was given a clean bill of health by the UN's joint meeting on pesticide residues.

Monsanto said it will appeal last week's decision, and stated that it stands by studies that suggest Roundup does not cause cancer.

Previously on EV Grieve:
Tompkins Square Parkgoers irate after finding notices for use of controversial weed killer
Posted by Grieve at 4:20 AM

The city needs to get something like the 'Rat Zapper'. Same plastic container that normally contains poison but instead give a quick electric shock to humanely kill the rats quickly.