How you all doing tonight? Grand opening at the New York Comedy Club on 4th Street this evening 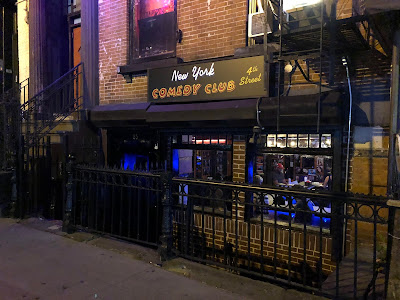 After two weeks in soft-open mode, which included a Jim Gaffigan drop-in, the New York Comedy Club officially debuts tonight at 85 E. Fourth St. between Second Avenue and the Bowery.

Amy Hawthorne, the club's director of operations, sent along the opening announcement. Per that release:

NYCC is offering discount admission through the end of September to anyone who lives or works in the area. Locals can redeem this offer at www.newyorkcomedyclub.com by using code NEIGHBOR at checkout to receive $10 admission Sunday-Thursday. In addition, full-priced weekend admission comes with a free VIP Season Pass for free admission to most shows through January 2019 with RSVP.

You can find the East Village schedule here.

This is the second location for the New York Comedy Club, which opened in 1989 on 24th Street between Second Avenue and Third Avenue.

They are taking over the former home of the EastVille Comedy Club, which departed for Brooklyn in April.

Did you hear the one about the comedy club opening tonight on 4th Street?
Posted by Grieve at 4:14 AM

Fine as long as Louis CK doesn't "drop in"

When Louis C.K. says he’s “making a comeback,” he means it literally.