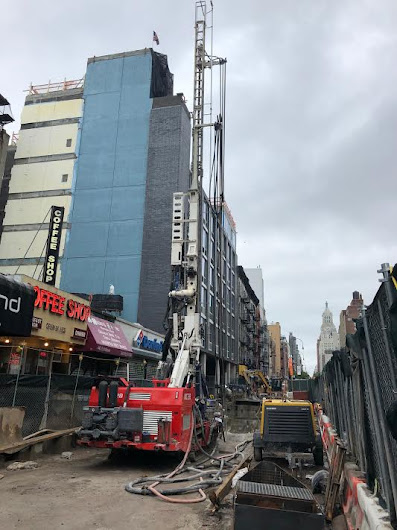 Work continues (one year in!) along 14th Street, as crews are putting in new, ADA-compliant entrances at Avenue A and a new power station at Avenue B for the L train.

Renderings show that one of the Avenue A L-train entrances will be right in front of the new residential building at 432 E. 14th St., site of the former Peter Stuyvesant Post Office branch from 1953 to 2014.... 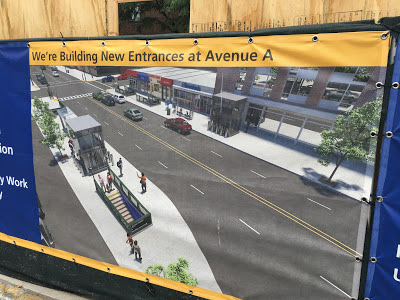 And that residential building has a name — EVE (not to be confused with EVGB on the next block), which is ready to start leasing this fall. CityRealty first noted this earlier in August. Per their report:

Prices of the 113 studio through two-bedroom apartments will range from $2,000 to over $5,000. These figures are consistent with the East Village median rent of $3,963/month, according to CityRealty data. Further apartment details are not yet available, but amenities will include a courtyard, lounge, outdoor exercise and yoga room, bike room, and laundry room.


Here's an updated rendering showing the 13th Street side, where the residential entrance is... 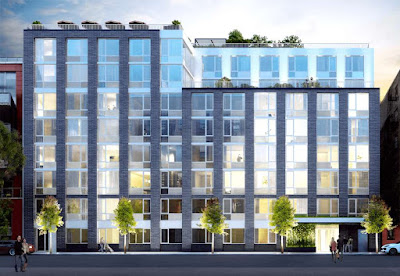 No word on exactly what EVE might stand for (East Village Expensive?). There was some hope that the building would have a name that paid homage to the previous tenant, the much-loathed post 0ffice, such as Next Window Please or You Can Come Back Tomorrow If You Want.

And no word about affordable housing in EVE. The Benenson Capital website still notes the following:

Benenson and the Mack Real Estate Group have formed a joint venture to develop a mixed-use residential and ground floor retail property in New York City's East Village. The 80/20 property will provide both market and affordable housing units.

Reps for Benenson and Mack Real Estate previously sought a variance to build four more floors (to 12 from 8) than the zoning would allow to make up for the "extraordinary construction costs" from poor ground conditions here. They withdrew this request in March 2017.

As for the commercial space, which will have the 14th Street entrance ... the CityRealty post states: "To the delight of residents and neighbors, Trader Joe’s is the building’s retail tenant." There were rumors that the TJ's wasn't happening.

The Peter Stuyvesant-PO-replacing residential building tops out on 14th Street
Posted by Grieve at 4:30 AM

That artist rendering was "very kind" to that ugly building. Of course nabbing a TJ's will make those living forgot that ghastly facade soon enough.

thank god for more soulless condos. it's not like we need (checks notes) the mail.

No more publishing "scoops" from random Trader Joe employees. They are typically chill, friendly workers but are prone to saying some wacky stuff. One tried to convince me that the cheap-ass store-brand "Simpler Times" beer was one of the best beers ever.

Agree, the artist does a great job giving this blah boxy deformed building(maybe because of constant redesign) a mesmerising aqua marine glow.

Renderings are the fiction of architecture.

I sure hope they compensated the businesses on that block in some way. With all the detours I bet their business is way down.

Yes, so down several have gone out of business. Lovely new neighbors. Better get a bucket- I think I'm going to be sick.