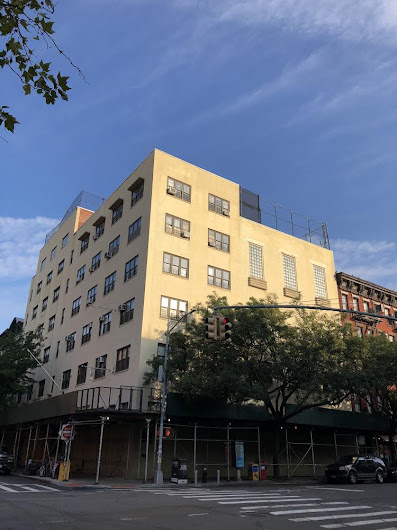 As I first reported on June 21, the Boys' Club of New York (BCNY) plans to sell its Harriman Clubhouse building on the northwest corner of 10th Street and Avenue A.

In a letter to alumni, Stephen Tosh, BCNY's executive director and CEO, said that the 7-floor building, which opened in 1901, will remain in operation through June 2019.

The neighborhood surrounding the building has changed dramatically since Mr. Harriman built this building, especially in the past few decades.

The Daily News obtained a copy of the Feb. 24, 2015, BCNY board meeting minutes, in which Tosh stated that "enrollment was actually rising sharply, based on an increase over the preceding five-year period, mainly among boys and young men from low-income families."

At that point, the board had hired CBRE, a real estate investment firm to assess the value of its three city properties, and some board members indicated a desire to sell Harriman even then and use the proceeds for income or another facility in a different neighborhood, possibly East New York, Brooklyn. "Real Estate is a source of capital," the minutes note.

It was in that meeting that Tosh told the board the Harriman Clubhouse had experienced a "47% increase in attendance over five years and the majority are from low-income families."

Tosh told the News that the 47 percent increase "came only after we invested significant resources, including picking up boys from a number of elementary schools." He added: "This is still well below the attendance levels from the 1980s and 1990s, when the neighborhood was very different."

This revelation from the minutes upset local state Sen. Brad Hoylman, who told the News:

"Contrary to the claims of declining enrollment, the minutes show that the clubhouse has seen a surge in attendance, particularly from boys and young men from lower-income families. It confirms that if anything, there's a growing need. The Boys' Club should be building on its legacy, not selling out to the highest bidder. The last thing this neighborhood needs is another luxury condominium or expensive hotel."

Last week, Hoylman and other local elected officials sent a letter to the organization, asking them to put a hold on their plans to sell the clubhouse in order to gather community input and explore other options to keep the facility here.

Sen. Hoylman's office shared a copy of the letter with me. It reads, in part:

The meeting’s agenda should include the following:
1. Membership profile by measures such as age, area of residence, etc.;
2. A transparent overview of organizational finances;
3. Overview of past outreach efforts to increase membership among boys and
young men at various age levels; and
4. Options and strategies that would allow your organization to remain in the current facility.

We strongly value your mission to empower boys and young men by providing effective programs and a supportive community. As you are well aware, the Harriman Clubhouse has been a vital part of our neighborhood for more than a century. Therefore, the decision to sell such an important community asset must only be taken after rigorous analysis and extensive public consultation.

Tosh told the News that they are reviewing the letter while remaining "deeply committed to serving our current members with programming on the Lower East Side."

Previously on Ev Grieve:
Boys' Club of New York selling East Village building; will remain open through June 2019
Posted by Grieve at 4:30 AM

Isn't this a private entity? I know it's a non-profit but do these politicians have any right to demand any of their info?

I don't claim to know all the rules and regulations which an organization like this one must follow but I suppose the building has very low property tax and the organization benefits from other subsidies running as a non profit. So yes, politicians can butt in and demand things of them. NY fortunately is not a "libertarian" town just yet.

The point of the Boys' Club is to serve the youth of a community. And since all service is local such as: police, fire, libraries, heating/cooling/senior centers, the youth of our neighborhood will be denied service when the 10th street Club closes. They will not walk a half hour to go to the lower East Side or take a train to Brooklyn. They will be denied the programs all together. The state and the city invest in the Boys' Club with grants and tax breaks to maintain their program and facilities. And they receive private and corporate donations. But like many institutions, they have been bitten by the real estate bug and are parsing attendance as the reason for closing 10th street and selling to support other club with more of a need. In my mind poverty is poverty. And defaulting on your charity's goal is immoral and criminal. THEY SHOULD BE INVESTIGATED.

I'm not impressed by the letter from Holyman, Brewer,and Rivera. It's perfunctory at best. And in the ONE PARTY RULE world we live in, we have little to hope for to keep the 10th street club open that has served the community for over a 100 years. And for what? the 30 pieces of silver that goes into the Dem coffers. PATHETIC. PATHETIC.RECALL THEM ALL!

@Cmartyy Agreed. This decision affects local services that the community has counted on for years. The Boys Club also receives some funds through government grants, and has non-profit status which allows it to operate without a tax burden. The fact that our local politicians are asking for some answers is no different that when Beth Israel sold out to Mount Sinai, which turned around and sold of several buildings, resulting in the loss of 600-700 hospital beds. Top get the same medical services from them—including maternal and neo-natal, you have to treacle up to 100th Street and Madison Avenue. The Boys Club helps keep kids off the street, thus preventing more emergencies. I learned how to swim there, which has saved my life on a few occasions. Too many of these non-profit entities are turning into real estate players rather than serving their original missions to the community.

This could be the next "Rivington House" scandal if we don't pay attention. cmarrtyy, that was well put but your second paragraph doesn't solve the immediate problem. Holyman is fighting for us unlike the Rivera who betrayed us by passing the Tech Hub without landmark and height restrictions. She can no longer be trusted to do right by those that voted her into office.

for a start everyone EVERYONE should be calling, writing, and sending emails in response to the proposed building sale.
when calling upon the local elected officials don't forget to mention that you or your kids, or your neighbor's kids, use the facility AND THAT YOU VOTE

there are few community facilities left like the boy's club. let us not lose another valuable neighborhood resource. the boys club should be celebrated for lasting for over 100 years, not sold for the highest dollar and then destroyed.

Noble you're right about Holyman. But it did take months to issue a response. My biggest problem is with Rivera. She wants to take back PS64 at the cost of what? 60 mill + renovations? And for who? 15 old CHARAS members and a daycare center? The Boys' Club would probably sell for 20 mill and provides more services than PS64 ever did for the community. Mary Help of Christians sold for 40 mill - all that land and 3 buildings. The Boys' Club would sell for less than a 1/3 of that. Why doesn't she ask Mayor Bill to buy it and pay the Boys' Club to run it? Or the Parks Department? But sad to say, Rivera does little or nothing to protect our interests. What a waste. ONE PARTY RULE. ONE PARTY RULE

I just sent an email to The Boy's Club. Such a wrongheaded, sad decision :(

Does anyone have the e-mails/phone numbers/addresses for the Boys' Club? I'd gladly get in on this!