The DOH temporarily closes the Ainsworth on 3rd Avenue (again) 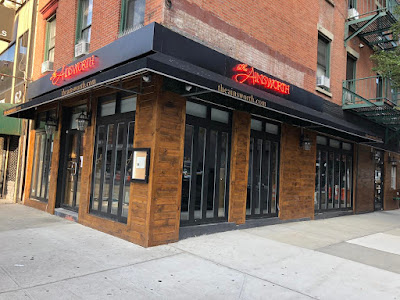 Updated 8/29: The Ainsworth is back open.

Several EVG readers, via email and on Twitter (h/t @JCooper911), pointed out that the Ainsworth East Village on Third Avenue and 11th Street was closed over the weekend ... which coincided with a DOH inspection on Friday.

The note on the front door, which covers the DOH's yellow closure sticker, states that they are closed for maintenance to get "the place ready for football season!" 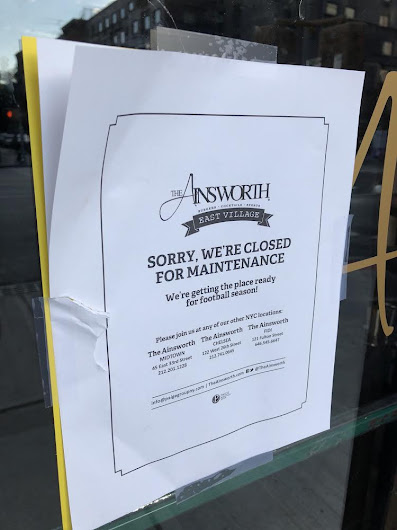 The DOH temporarily sidelined the EV Ainsworth back in February. According to public records at the time, inspectors issued 86 violation points. The top violations included: Food Protection Certificate not held by supervisor of food operations. (They need one for serving those wings dusted with 24-carat gold.)

On Friday, inspectors issued 102 violation points. The top there violations listed, per the public report:

In February, the Ainsworth also covered up the DOH notice... 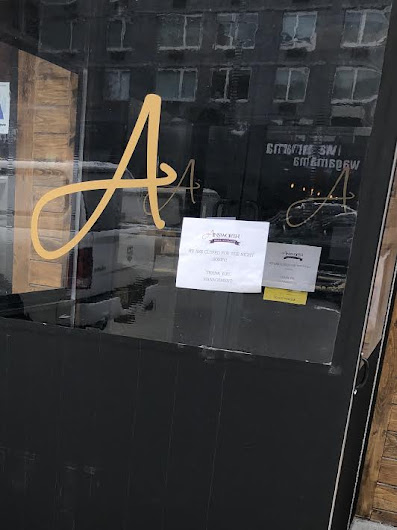 The Ainsworth, part of a growing chainlet of upscale sports bars, opened on Third Avenue at the end of December. Unrelated, the building — at 64 Third Ave. — was recently purchased by a Canadian investor.
Posted by Grieve at 4:00 AM

Email ThisBlogThis!Share to TwitterShare to FacebookShare to Pinterest
Labels: DOH, The Ainsworth

I think covering the DOH notice must be, in itself, a new VIOLATION. Anyone going to report this?

PS: NEVER patronize this place; but for those who do, you'll get what you deserve, apparently!