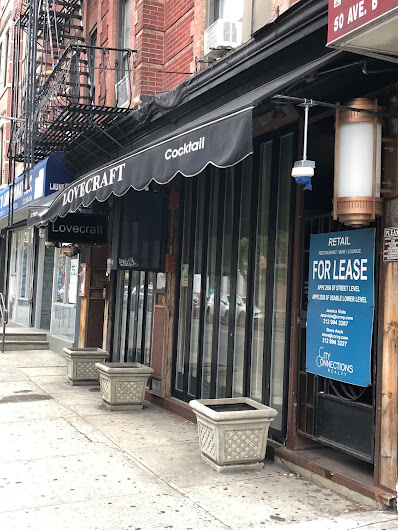 The Webster Hall alum have withdrawn their application for 50 Avenue B/238 E. Fourth St.

They were to appear before CB3's SLA committee tonight for a new liquor license for a venture that featured a pizzeria and live music. Applicants included Stephen Ballinger, the head bartender and bar manager at the now-closed Webster Hall from 2014-2017, and Adam Ballinger, who served as the venue's marketing manager.

According to a tipster: "They withdrew completely and are not interested in that space at all."

That space previously housed Lovecraft, which was inspired by horror writer H. P. Lovecraft. That bar-restaurant closed in early 2018 after three-and-a-half years in business. The other piece of this parcel, the slice joint Johnny Favorite's, shuttered in August 2017 after debuting in April 2015.

Previously on EV Grieve:
Lovecraft has not been open lately on Avenue B

Webster Hall alum proposing new venture for former Lovecraft space on Avenue B
Posted by Grieve at 4:10 AM

Great news for the neighborhood.

Thank God! Poco creates enough of a disturbance. Our intersection has become unbearable with people who don't give a shit.