On the Bowery, an homage to the Alleged Gallery era 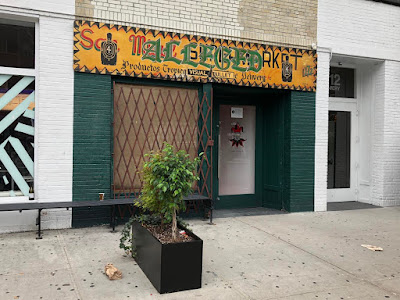 Over on the Bowery, the exterior of the Hole has been transformed, complete with the original signage from Aaron Rose's Alleged Gallery, which had a 10-year run from 1992-2002 on Ludlow Street.

The transformation is part of a gallery exhibit that opens tonight here at 312 Bowery near Bleecker titled "Now & Then: A Decade of Beautiful Losers."

The “NOW & THEN: A DECADE OF BEAUTIFUL LOSERS” exhibition venerates the 10-year anniversary of the ‘Beautiful Losers’ documentary that made its US premiere on August 8, 2008 at the IFC center in New York. "Beautiful Losers," directed by Aaron Rose and Joshua Leonard, captured the characteristic spirit of a community of artists affiliated with the Alleged Gallery [at 172 Ludlow St.]. ‘Beautiful Losers’ depicted a community of artists including Barry McGee, Ed Templeton, Mike Mills, Thomas Campbell, Jo Jackson, Shepard Fairey, Chris Johanson, and Margaret Kilgallen during the Alleged Gallery era.

Email ThisBlogThis!Share to TwitterShare to FacebookShare to Pinterest
Labels: The Hole