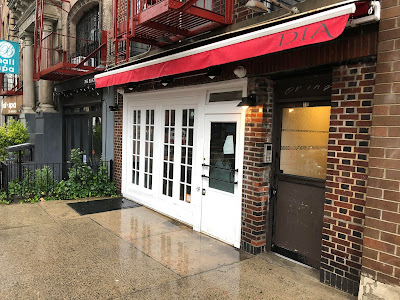 Just noting that the awning is up at the new restaurant coming to 58 Second Ave. between Third Street and Fourth Street.

Once open, Dia will specialize in "Roman-style pizza and coastal Italian seafood," per their (still under-construction) website. Their listed hours are 5 p.m. to midnight Monday through Friday, with an 11 a.m. weekend opening.

Not sure at the moment who's behind this venture. The applicant, who had not been previously licensed, received the OK for beer-wine from CB3 back in March.

N'eat, which offered "new Nordic fare," had a nearly 8-month-run at the address before "closing for renovations" and never reopening in July 2017. Before N'eat, Cellar 58 served Italian fare here.
Posted by Grieve at 4:02 AM