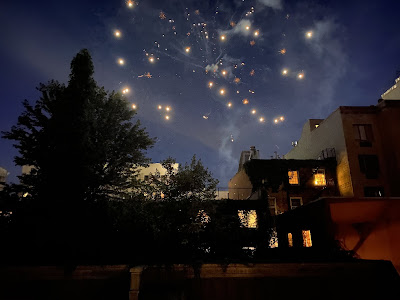 We've received about a dozen emails or DMs from readers about people setting off fireworks around the neighborhood in recent weeks. Received some photographic evidence via Vinny & O from last night around 10th Street and Avenue C.

The increase in illegal fireworks have been documented throughout the city. Per Gothamist on Monday:

According to city data, 849 complaints about fireworks were logged with the city's 311 hotline in the last two weeks alone. That's a nearly 4,000 percent increase from the same period in 2019, which saw just 21 recorded complaints. In the first two weeks of June during the previous five years, there were less than 50 complaints related to fireworks in total.

As with other 311 data, it's not clear that the figures reflect an actual spike in activity. In many cases, the growth of nuisance calls is a better barometer of gentrification than any specific change in behavior. But while illicit fireworks have long served as the sonic backdrop to summer nights in NYC, some residents say the intensity and frequency has been noticeably greater in 2020, with many of the late-night displays appearing strangely professional.

And via NBC 4 on Wednesday:

Now, people in the city that never sleeps have a new audio accompaniment to their surreal spring: Booming, amateur fireworks displays that start at sundown and continue deep into the night.

Illicit bursts of fireworks from street corners and rooftops aren’t uncommon in the city’s neighborhoods in the days before the Fourth of July, but the past few weeks has seen an extraordinary surge in such displays.

In the first half of June, there were 80 times as many #nycfireworks complaints compared to the same period last year. Fireworks usually start late June. This year it’s earlier, longer and bigger. Who’s supplying all these professional-grade fireworks? https://t.co/NwoVJI7RQg

In the East Village, there have been reports of fireworks on multiple side streets and Avenues... and a lot of terrified dogs in apartments.

Previously.
Posted by Grieve at 12:30 PM

Email ThisBlogThis!Share to TwitterShare to FacebookShare to Pinterest
Labels: fireworks

Some of the fireworks videos on Twitter are insane. People living uptown on the 17th floor of an apartment building have nonstop explosions going on outside their windows all night long. These are not the kinds of fireworks we used to set off as kids, which were mostly snakes, bottle rockets, firecrackers, volcanoes, whistling chasers, M-80s and the occasional Roman Candle. These are the kind of semi-professional pyrotechnics that mob families set off at their annual street Fourth of July street fairs in Brooklyn and Staten Island, or that small towns in Pennsylvania use.

There are a lot of theories about who is behind this, and why the cops aren’t stopping it, but the fact that is is happening all over the city and country at the same time shows that someone thought up a creative way to make money while all the businesses are shut down. People are rightly complaining that this is a major quality of life issue. On the other hand, this just might be the fastest way to end gentrification.

Someone set fireworks on 10th street and Second Avenue last night. It lasted a while. Anyone heard?

@Nash I heard and saw those, too. I was so confused lol

this has nypd written all over it

Ha Ha back in time we go at least you do. July 4 gonna be loco in the Big A. Don't complain too much here in Vegas where I live now and smoke large amounts of legal pot every day a whole house full of illegal fireworks blew up last night and it was close enough to me that I heard it and thought a nuke test had happened. True story.

Some of those fireworks are pricey there's some interesting hobby money out there. There are cars cruising and drive-by scattering firecrackers. Revel scooters are treating one way streets and traffic lights as suggestions. Burglaries are up. Shootings spiked over the weekend. The cops have taken plainclothes off the street. There will soon be a lot of blue flu, maybe even on the 4th of July.

For everyone who misses or missed the bad old days here comes a replay. Without the hordes of street level drug addicts but with smartphones and fully networked opportunistic petty criminality. Gangs and the bored are realizing that the cops are slightly overwhelmed and very under motivated.

DeBlasio was awful before the crisis and he has failed in more ways than seemed possible. Now he and his wife will try to shift as much money as they can under the guise of "disadvantaged communities".

I, for one, welcome our wave of urban unrest. The city had become too sterile. Fear City is gonna suck without any culture to go along with it and no lowering of rents but the coming breakdown of civility is unstoppable so embrace the chaos.

My concern is not the noise or "frightened dogs" it the potential for fires as one of flies into an open window while the homeowner is away. If you think this will make Kayla and Brandon head back to the suburbs think again, those kids love chaos.

The smartphone/social media era has given us ever more people who are both infantile AND selfish to the bone, and who have no respect for their community. It doesn't help that the mayor is beyond useless and the cops are doing their best to be beyond useless.

Be careful, though, when you tell people to "embrace the chaos", b/c you may not like the chaos very much if it touches your life.

I also remember the bad old days and they weren't good. If you read the comment carefully I suggest embracing it as it is beyond the current, for lack of a better phrase, "leadership" at all levels of municipal government to stop it.

Cars blasting the theme from The Purge during the looting was indicative of what has been bred by the rottenness of our society over the last ? years.

Take "embrace" as steel yourself against", prepare for and try to find some positives. If you find any let us know.*

* I actually don't mind the fireworks but the point above about fires is important. When Kayla and Brandon start getting robbed or beaten down we'll see how long they stay.

One of the major factors in the 88 riot was the Super M80s [quarter sticks of dynamite] the anarchists, squatters and houseless were setting off as people marched around Tompkins Square Park which scared the you know what out of the White Shirts cops in the command trailer HQ they parked inside the park.Back then the park had very little lighting and the flash bang of those M80s scared me too and one went off so close my ears were ringing all night. The rest is history and a record amount of police brutality got unleashed on the neighborhood. Whose Effin Park ? Our Effin Park ! You don't need a weatherperson to see which way the wind is blowin on the LES now Tompkins Square Everywhere and A hard rain's gonna fall !!!!

It is unbearable. Night after night week after week just when you think it is done another loud blast in the middle of the night. Poor dog a wreck as am I with no decent sleep for weeks. I just don’t get it.

Last night someone on 10th St. near the park and another someone on or near Avenue B were trying to outdo Macy's until about 1 AM. I don't have dogs, but man, my cats sure are not happy. And yeah, it does sound like the 70s/80s, but it's much earlier and much more upscale - although I have yet to hear something explode in one of the airshafts my building shares with the one next door, that used to be SOP.

Check out #nycfireworks on Twitter. People are assuming it is started by the po-pos themselves. Perhaps a warning of what’s to come. Some are saying they do it so that people will call 311 more than ever and if true then it’s working.

M80s are illegal now. You could literally blow your hand off with those. They were dangerous fun. like skiing.

I am confused. Everyone says they want the cops to stay out of our lives. But how come now you want them to stop the fireworks? So wishy washy..They are complying to your wishes.