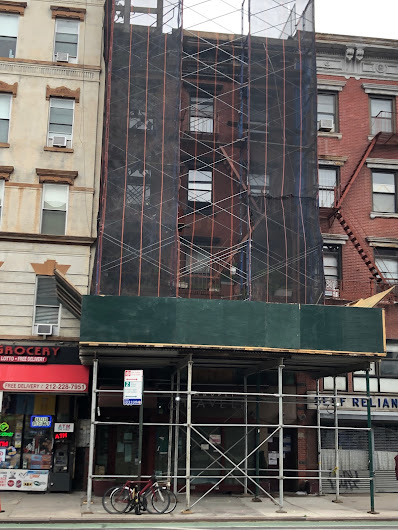 The Haveli Banjara Indian Restaurant is officially done — at least at 100 Second Ave.

The restaurant has been closed since late October here between Fifth Street and Sixth Street. A "Sorry we are closed today" sign greeted potential customers for months. 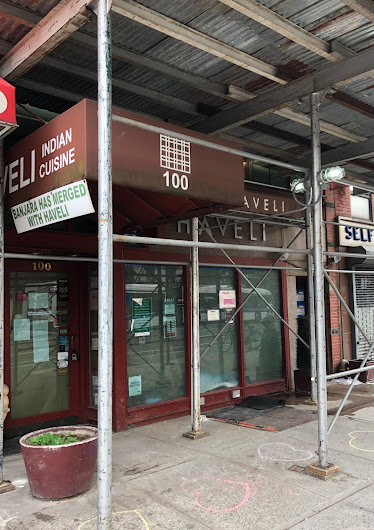 Recently approved work permits with the city lists the following work happening at the address: "Convert first floor eating and drinking establishment into a residential apartment."

Public records show that the building changed hands in March for $6.1 million ... with the Highpoint Property Group listed as the new owner. The Group's other East Village properties include The Slater at 174-176 First Ave. and The Topanga at 202 Avenue A. And in keeping with the the theme, No. 100 goes by The Callahan.

One EVG source said that the previous landlord died. The building had been on the market since September 2017, with an original asking price of $8.6 million.

In November 2017, the restaurant's staff told patrons that they would be closing in early 2018, with the hopes of finding another location nearby.

Haveli was the oldest surviving Indian restaurant in the East Village, opening in 1987. Banjara moved in here in November 2013.

Previously on EV Grieve:
Haveli Banjara Indian Restaurant said to be closing and relocating early next year
Posted by Grieve at 6:32 AM

Losing Haveli was a loss. Having tried so many of the E. 6th Street Indian restaurants I can tell you, that Haveli ranked at the top in a tie with Mitali East. Mitali was better priced slightly but Haveli has service and atmosphere. The food at both was outstanding compared to some of the slop houses that were next door to them.
As for the building...there is still a tenant on the 3rd floor and renovations seem to be going on around him. A hold out? Good for him. But it will be nice to have something valid in that spot again.

That was a beautiful restaurant. owned by such a friendly and attentive family. It's a real loss for the neighborhood.

They've been working in there well before the lockdown was lifted. They would demo during the day and at night carry the debris away.

I miss those slophouses - but we don't seem to have penniless students anymore. The big deal was either hitting one of these places or one of the Eastern European places for soup.

Wow, I've heard that commercial-to-residential conversions are time consuming and potentially expensive. As in, taking years (I heard one case of 7 years) to get the category change. Very interesting.

Maybe the new owners have the right idea. Storefronts has been experiencing a slow death for years

Their lunch buffet was a good deal, years ago.

Haveli was one of the best places to bring friends and relatives from out of town for an elegant and relaxed Indian meal. I still think that Mitali had the best samosas and chutneys, and their rice was divine, but once they closed Haveli was the place to go.

I can remember how crowded Haveli always was on Friday and Saturday nights — you would have to sit upstairs in the balcony area and look down at all the other tables. In recent years the balcony was closed since they never had the big crowds.

Haveli and Mitali were nice alternatives to the other spots on 6th Street like Shah Bagh (the first Indian restaurant on the block, with the best spice cabbage and basmati rice), and a succession of greasy Indo-Pak-Bangladeshi spots like Kismoth, Anar Bagh, Sonali, Romna, Shamoly, all owned by the same family and all basically serving the same food. Mitali’s food was different because it was owned by a waiter from Kashmir, an Indian restaurant uptown, and there was a big quality difference in both the quality and the price.

The running joke was that all of the original 6th Street Indian restaurants shared a central kitchen out back and just brought food in via the alleyways and thorugh the back doors. These were the student hangouts and for people on a budget, and they served their purpose well.

After Banjara’s management took over at Haveli, the dishes changed in subtle but noticeable ways (no more hint of lemon in the channa masala, no more perfectly charred naan) but in terms of food and ambiance it was still head and shoulders above the rest. It was a place you could have great food and great conversations, and I’m glad I had many of them while they were around With yet another major closure, the East Village will never be the same.