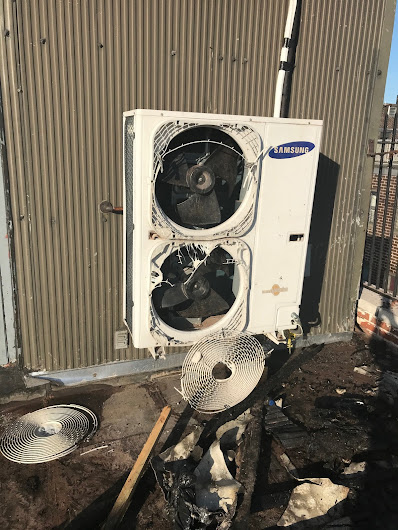 The ongoing fireworks around the neighborhood nearly resulted in a major fire early this morning.

An EVG reader shared the following from along Avenue C:

People setting off fireworks from Avenue C and neighboring buildings caused a fire at 1 a.m. on the rooftop of our co-op. Thankfully someone saw it and called the Fire Department and no one was hurt. Our doors were destroyed by the firefighters gaining entry, and an apartment now has considerable water damage as a result of the effort to put out the fire.

The reader then asked a follow-up question that others have asked: "Is there any effort to try and stop people from lighting these fireworks?"

And a few more photos from the roof, 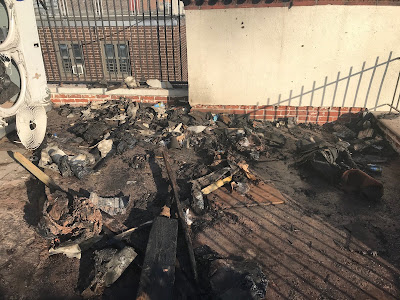 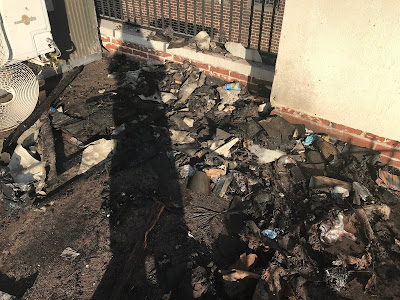 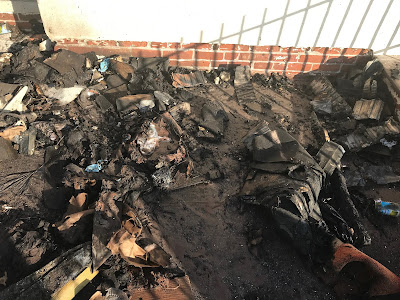 Per another building resident: "Part of the brand new roof will need to be replaced, and the apartment below suffered water damage. It could have been much worse, but just goes to show what happens when neighboring buildings set off fireworks from their roof."
Posted by Grieve at 8:30 PM

First it was the helicopters in the area now the fireworks. My dog has been freaking out the past few weeks because of the loud noise. It used to be so much better when there was not fireworks.

what is going on with the fireworks?

NYPD completely ignored my 911 call about major fireworks, so seems like they're doing not much.

Who is responsible for the fireworks? Is it the kids who moved back to the city after the quarantine?

I heard some fireworks on my block from 8pm until like 2am last night. I’m on 7th St. and 1st Ave.

I think the cops are having a little "blue flu"....
Easiest way to get back at the public for protesting.

Ok... I went on Twitter and found #nycfireworks. It’s a thing all over NYC and people are assuming it is started by the police.

There is a flow of these illegal fireworks coming into the city which seems to be highly organized since the quantity of these more elaborate fireworks has been reported in every borough. Someone as in an out of state company or organization has found a stealth way (so far) to get their products into the hands of these teenagers or young adults the way one shares a Tweet or viral video. The cops need to find the source and it won't likely be possible without someone spilling the beans first. My guess the internet might be a good place for them to search as well as the streets, people talk so start listening.

PS The the dog owners who are freaking out, at least your home has not been set on fire by these fireworks.

Soon enough the popping will be guns and mortars if antifa assholes get their way and seems many politicians support them. Will you be able to tell the difference? Love the conspiracy theorists! Serious money behind all these fireworks.

If the police wanted to crack down, they could. It’s not like it’s hard to find people setting off fireworks, follow the boom.

The Brooklyn Borough president says don't call 911 or 311, he says the community needs to take care of it. We should go out into the streets, at 1am, and talk to these young people and explain to them why their acts are so dangerous. If you can imagine that ending well. Also, you can be concerned for your dog and a fire at the same time Noble.

I've had a lot of admiration for Eric Adams.
He lost a lot of cred. with that bullshit.

Eric Adams is ZERO at this point. What kind of elected official tells People NOT to call 911 or 311 when dangerous fireworks are being set off randomly?

This post already shows the extensive damage to the roof of one building, and I feel very sorry for those in this building whose apartment was damaged by the water from the FDNY putting the fire out.

The proliferation of fireworks is not some joke, and not some harmless prank. This comes very close to being government-endorsed, stupidity-caused arson.