Report: These 12th Street residents are going on 5 months without gas for cooking 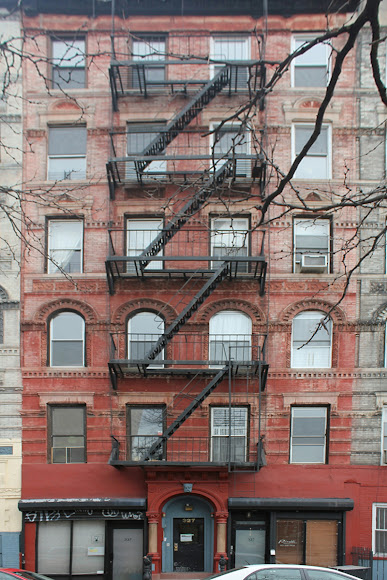 A handful of residents at 327 E. 12th St. between First Avenue and Second Avenue have not had any gas for cooking since February, the Daily News reported.

[She] hasn’t been able to use her stove since February. And for her, that means no home-cooked bone broth — and more trips to the grocery store for provisions at a time she’d rather stay in.

"It makes me have to go out more," said the 70-year-old, who's lived on the fifth floor of a sixth-story walk up since 1971. "I find I'm having to walk in the middle of the street to avoid people who are drinking and hanging out on the sidewalk without face masks."

Christ and at least four other tenants are without cooking gas. 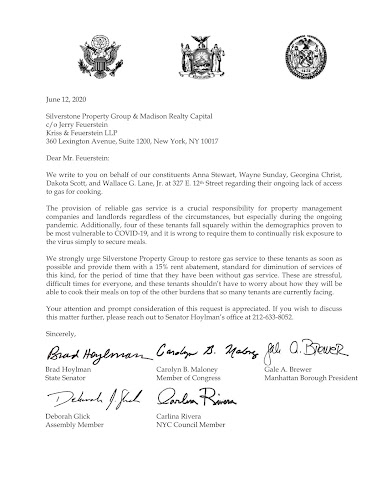 The provision of reliable gas service is a crucial responsibility for property management companies and landlords regardless of the circumstances, but especially during the ongoing pandemic. Additionally, four of these tenants fall squarely within the demographics proven to be most vulnerable to COVID-19, and it is wrong to require them to continually risk exposure to the virus simply to secure meals.

We strongly urge Silverstone Property Group to restore gas service to these tenants as soon as possible and provide them with a 15% rent abatement, standard for diminution of services of this kind, for the period of time that they have been without gas service. These are stressful, difficult times for everyone, and these tenants shouldn’t have to worry about how they will be able to cook their meals on top of the other burdens that so many tenants are currently facing.

Silverstone did provide hot plates, though they reportedly aren't too functional.

A Silverstone spokesperson told the News that they are "ready, willing and able to repair the gas lines at the property as soon as possible."

However: "In order to do so, the property must be vacated according to engineering experts Silverstone has consulted."

Christ said that she is skeptical, and thinks this is "a ploy to empty the building and jack up rents."

No. 327 was among the many East Village properties that disgraced landlord Raphael Toledano owned at one point during his local building grab. He had been accused of harassing rent-stabilized tenants in a bid to vacate and deregulate units in them.

The listing at Streeteasy describes the building this way:

Most units have been gut-renovated with innovative and luxury finishes. Our design team works to create a rustic/modern look to appeal to a vast array of tastes and lifestyles. 327 East 12th Street is a building combined with beautiful high ceilings that provide an abundance of natural light and fresh air into each residence. Amazing Features Include:

A sister property at 325 E. 12th St. has also suffered cooking-gas blackouts.
Posted by Grieve at 6:15 AM

BS! our building reinstalled the entire gas system without emptying it - it was awkward but it got done.

IMO, Silverstone is flat out LYING about this.

Why is it that among ALL our elected officials, from de Blasio on down, NOBODY can bring Silverstone to heel? Especially since it's clear that Silverstone "shopped" for an engineering firm that would say the building had to be vacated! But that's merely ONE opinion by ONE firm. There are TONS of professional engineers in this city who are not crooked - let's have NYC get a couple of them to weigh in on this.

How is it that NOBODY ELECTED can be an effective advocate for these tenants - to say: "No, Silverstone is wrong and they can perfectly well get the gas lines done without emptying the building"?

WHO IS GETTING PAID TO LOOK THE OTHER WAY ON THIS?

How about some news outlets showing up to interview people, and putting this on the front page of a newspaper, a news website, making it a major trending tweet, or whatever it takes?

Silverstone needs to be SHAMED in the most public and effective way possible.

It's nice that those officials sent a letter, but to "strongly urge" a deceitful landlord or management company to do the right thing is going to achieve nothing. They need to be much more than "strongly urged".

Such total and complete lies from predatory capitalists. Icon Realty pulled the same thing and got away with it for much longer, most memorably with the Stage Restaurant building on Second Avenue. Glad the pols are more involved on these issues then they were previously.

Yeah. That should get them moving.
Thanks, officials!

my Heart goes out to these folks, This Sucks these vampire owners who renovate in the worst possible inconsiderate ways and the claim by these owners that they have to empty the building is total bullshit.

We had a gas leak in our building i oversaw the work for our tenant owners group it took a honest year of work and a lots of holes in walls to get our gas back on but no one had to leave their homes and it was never suggested by the plumbers or contractors.

@12:38pm: Excuse my cynicism, but I don't think that letter from the politicians will do anything.

What kind of penalty/threat does that letter represent that would make Silverstone move off the dime?

I feel sorry for these tenants, who are being made to suffer b/c first one jerk (Toledano) and now another is in possession of the building and its management.

Went about 2 years with no gas courtesy of Citi Urban at 131 Ave A a few years back...no rent reduction, just an electric toaster oven.