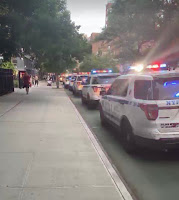 A 36-year-old man died last night after the gun he was carrying accidentally discharged in his waistband while in the lobby of Campos Plaza on 12th Street and Avenue C, according to published reports. (PIX11 and the Post.)

The man was reportedly adjusting his pants inside the apartment building at 635 E. 12th St. when the gun fired, striking him in his upper left thigh around 7:30 p.m. He died later at Bellevue.

Screengrab outside Campos Plaza via the Citizen app
Posted by Grieve at 11:00 AM

Question: why would anyone be carrying a gun inside their waistband? Whatever the story is here, it was never going to have a happy ending.