Nomad, the great restaurant on 2nd Avenue that has everything but the interest of food writers 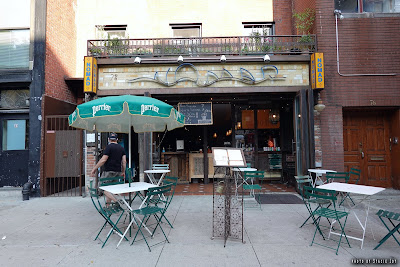 Back on Monday, we noted that owner Mehenni Zebentout is now offering menu items from the now-closed Cucina di Pesce at Nomad, his restaurant at 78 Second Ave. between Fourth Street and Fifth Street.

On Tuesday, journalist Richard Morgan filed a long read on Nomad for Heated titled "This Algerian Restaurant Has Everything Diners Want."

Nomad is a highly visible yet under-appreciated gem along Second Avenue. Per Morgan:

Nomad is indeed a joyful dining paradox, offering the platonic ideal of a great night out to a city that refuses to acknowledge its existence in one of Manhattan’s most-trafficked neighborhoods. It is not just everything diners say they want — affordable, authentic, delicious, unique, romantic, and generally a resonant moment of redemptive gastrodiplomacy — but also everything food writers and editors say they know like the backs of their hands.

As Morgan points out, the restaurant has barely even registered among the city's food writers and restaurant blogs.

Even in the shadows of the glutterati’s attention, Nomad radiates a defiant truth: It is the coolest, tastiest, truest restaurant that New York’s galloping gourmands have no interest in letting anyone know about (if they themselves even know about it at all).

“I tell clients that what I can do is get people to have one meal at your place,” said a longtime restaurant publicist who requested anonymity in exchange for candor. “Even if Pete Wells writes about it — that Albanian place in the Bronx, that Sichuan place in Flushing — how busy are those places today? More than ever, restaurants have maybe six months from opening — operating on all cylinders, all the bells and whistles — to establish themselves in the conversation. Other than that — or even if they do accomplish that — they slip into the void of the forgotten. Nobody wants to eat in Siberia and that’s what these great restaurants end up serving: Siberian cuisine.”

You can read the full piece right here.
Posted by Grieve at 6:35 AM

Email ThisBlogThis!Share to TwitterShare to FacebookShare to Pinterest
Labels: Nomad

I have to say, I have loooong wondered (and long been pleased) why this place is off the radar of the FoodBloggerz(tm). I have always had a good meal here. It, like Via della Pace, feels like part of the neighborhood in the older sense. I've been here when it is nearly empty, been here when packed to the gills. Food has been great, service has been great, and the general vibe of the place and the customers has been great.

As I make a point of cooking as much as possible to keep my budget in check, I'm not someone who eats out most nights, but, this is definitely on my EV shortlist for a good meal.

Signed,
Not A Food Blogger, But, I Know Good Food When I Eat It!

Shhhh! This has always been a great spot with delicious food and good music. It's an oasis among the rowdy spots along the avenue.

This is always a great place to sit down for a meal or a drink, usually with good live world music. I love their Algerian Merguez Sandwich, and couscous. Last year I had a great Makrout and Almond heart sweets. Defly I recommend it.