A new surface for Extra Place 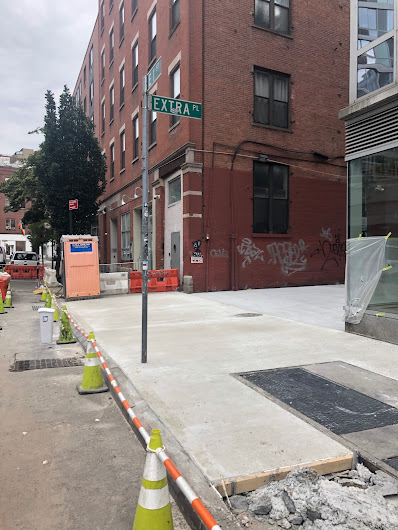 Been about 2.5 years since we mentioned anything about Extra Place, the pedestrian walkway off First Street between the Bowery and Second Avenue... workers recently replaced the concrete sidewalk... 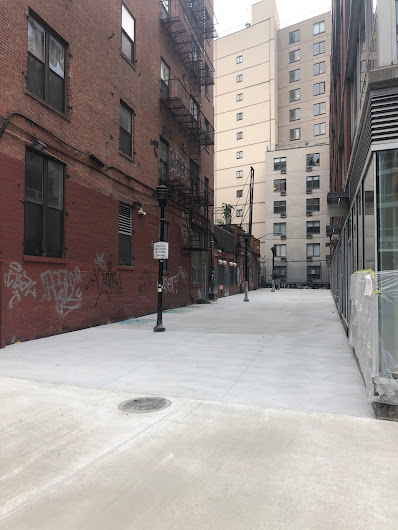 And the space remains quiet. The main tenant back here, David Chang's Momofuku Ko, hasn't reopened yet from the COVID-19 PAUSE. The Japanese housewares boutique Nalata Nalata has the corner space and there's also a prep kitchen for Daniel Boulud at the end of the walkway.

Through the years, only Momofuku Ko has had any success in this former alley that ran behind CBGB. (Danny Fields photographed the Ramones for their third album, Rocket to Russia, here in 1977.)

As noted here through the years, a handful of restaurants and businesses have come and gone, such as Red Hook Lobster Pound.

In January 2007, reps for Avalon Bowery Place unveiled plans to make Extra Place "a slice of the Left Bank, a pedestrian mall lined with interesting boutiques and cafes." 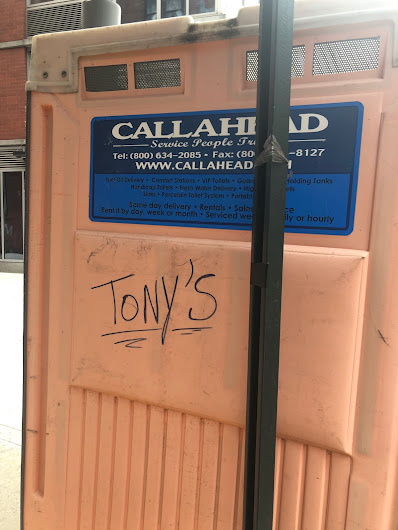 • Extra Place now officially a Dead End
Posted by Grieve at 6:00 AM

In many ways, those Avalon building are the worst thing to ever land in the neighborhood.

That location is really an ugly dead end alleyway unless major cosmetic changes are made to the space such as a garden with lots of trees I do not see any business either retail or a restaurant succeeding there.

It's an alley, that's all. Can try to tart it up, but that's putting lipstick on a pig.

It is a concrete box of an alley, a real alley has more charm. If the dreaded Avalon Bowery Place had any real interest or intent behind their pr press releases they would of put in some trees and decent seating. Greenery is sorely needed. Heck, a couple of planter full of no maintenance bamboo would make a world of difference. Disgusting the lack of real civic pride these corporations show in maintaining their properties beyond a facade for their ads.

this still belongs to DOT and Avalon had committed to having seating for public in alley. Happened for a while (managed by one of the businesses). Could put in a few things for kids and have tables and chairs for adults--could be nice "pocket park-like" space.

seriously put up some string lights, paint a mural, a couple of planters and it's fine. it's really a good time to eat outside, and away from parked and driving cars. this could be super useful space.