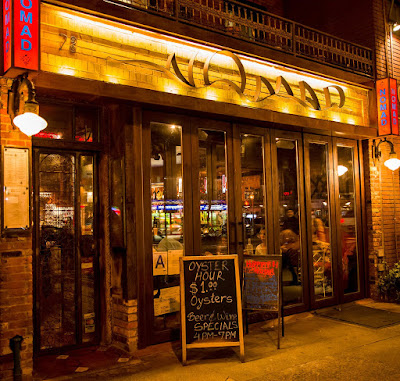 Good news for fans of Cucina di Pesce — owner Mehenni Zebentout has announced that menu items from the now-closed Italian restaurant are available for takeout or delivery from his other establishment at Nomad, 78 Second Ave. between Fourth Street and Fifth Street.

Cucina di Pesce, the unpretentious seafood-focused restaurant on Fourth Street between Second Avenue and the Bowery, closed in September 2018 after 32 years in business. The building at 87 E. Fourth St. had a new owner, and there was a rent increase for the restaurant space. (That space remains empty, though a Chinese restaurant is in the works for it.)

Late last summer, Cucina di Pesce's Instagram account teased a comeback with a photo of Audrey Hepburn wearing a sleep mask in a scene from "Breakfast at Tiffany's" with a caption "that was a nice break...WHO’S HUNGRY?"

Previously on EV Grieve:
• After 32 years on 4th Street, Cucina di Pesce will close after service on Sunday
Posted by Grieve at 6:10 AM