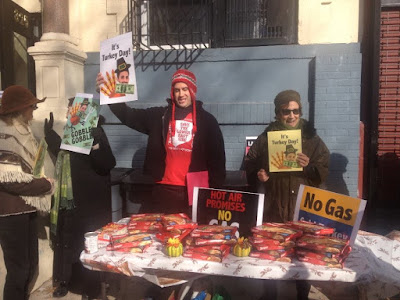 Residents at the Raphael Toledano-owned 325 E. 12th St. say they have been without gas for cooking for more than six months now. Yesterday morning, some of the tenants, along with other members of the Toledano Tenant Coalition, held a protest and "Toledano-Style Turkey Dinner" — featuring Banquet frozen turkey dinners — here between First Avenue and Second Avenue.

A handful of tenants announced that they are taking the under-investigation landlord to court. Here's more via an advisory from the Cooper Square Committee:

Now eight of the tenants are fighting Raphael Toledano in court for an order to restore the gas — one that his lawyers are vehemently resisting. While Mr. Toledano and his agents are likely enjoying warm and cozy kitchens filled with the aroma of holiday cooking, the kitchens of 325 East 12th Street will be cold & empty… except, perhaps, for the echo of Mr. Toledano, spouting empty promises of gas restoration and better relations with his tenants. Mr. Toledano has refused to meet face to face with tenants and elected officials on two occasions and opted to send his legal team (Belkin Burden Wenig & Goldman, LLP) instead.

"The Toledano Tenant Coalition believes that Mr. Toledano continues to harass tenants by unreasonable non-renewal of leases and through slow, poorly managed building construction designed to make tenant’s homes unlivable. The coalition also asserts that Mr. Toledano has irresponsibly forced both stabilized and market rate tenants to live for months without cooking gas in buildings overrun with vermin. The coalition remains committed to ending what they see as Mr. Toledano’s campaign against the tenants that call his buildings home."

Tenants at 325 E 12th St won't have cooked meals this #Thanksgiving because landlord has denied them gas for 7 mos. This is unacceptable! pic.twitter.com/fVfKABxg8z

Back in August, Toledano’s Brookhill Properties held a poorly received ice cream social for its residents, including the 12th Street tenants without gas for cooking. At the time, a Toledano spokesperson told The Real Deal that it was up to Con Ed and the city to address the situation. However, a Con Ed rep said that the shutdown at No. 325 "was prompted by an internal gas leak at the 12th Street building and that the company can’t restore service until Toledano makes necessary repairs."

Toledano, who told a reporter for The Real Deal in June that he's "worth a fuckload of money, bro," has been accused of a variety of predatory practices. In addition, 20 of his buildings were tested for toxic levels of dust. In May, Toledano agreed to pay more than $1 million to settle a lawsuit that alleged that he harassed rent-regulated residents at 444 E. 13th St.

He is currently selling several buildings from his East Village portfolio.
Posted by Grieve at 4:20 AM

Well they can always eat at the Bowery Misdion on Thanksgiving.

Seriously, how is this dirtbag not in the slammer? There is no way he should be a free man. Absolutely shameful, and my heart goes out to these poor folks. Bro.

I would love to see his ass on Rikers, bro.

It should be open season on douchebag real estate guys. Look what happens when they go unchecked. Hope the attorney general is keeping a close eye on this douche.

We got great help and won over our landlord with the help of Sokolski & Zekaria. It will cost the tenants money to pay but these people only represent tenants!We went without cooking gas for over 5 months until we brought them on. GOOD LUCK!!!

Come January 2017, deplorable real estate companies and landlords will be completely enabled to do what they want.

DT, his "friends" and son-in-law Jared Kushner will yield phenomenal power in NYC and NYS.

Kudos to Senator Hoylman for showing up for this protest. He's awesome. I feel badly that he's recently been the target of harassment as well. In my experience, he only tries to help the poor and under-served. Hang in there, Senator. We love you.

I am very sorry to read what these tenants are enduring. Toledano should be in jail for this.

As for 11:14am's comment, I disagree: I think DT and company will have very little power in NYC and NYS, b/c both the mayor & the governor aren't going to be cowed by little Donnie.

I feel for these people. I didn't have cooking gas for over a year. THANK YOU ICON REALTY! Hot Plate or Crock Pot?

The projects are better.

As always, thank you to EV Grieve for the best reporting on our neighborhood. You are the best that's left of what has been a truly spirited community in the East Village, and on this day of expressing gratitude, you are right up there on our list. These tenants, standing up for their legal rights, are another part of that same spirited community. And special thanks to Senator Brad Hoylman, one of the most genuinely concerned advocates for the people of this city.

Hot plates are a Fire hazard and HPDviolation.This crook should be in jail.Besides the horrible living conditions he has his tenants living in .Evan market rate paying $3700.In another building for a 1 bedroom .He has also pushed out 21 longtime small buisnesses .This creep has wrecked havoc on the neighborhood and needs to be in jail.

We had no gas for just under a year. Fixed now, but thank you SO much, Golden Realty! Our landlord only WISHES he were Kushner or Toledano...