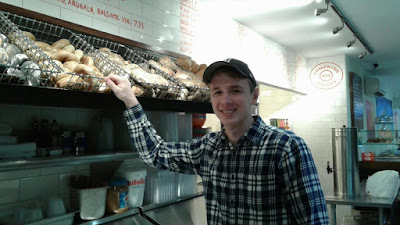 [Photo of Garrett the manager yesterday by Lola Sáenz]

After a test run yesterday, the new location of Tompkins Square Bagels officially opens today at 184 Second Ave. between 11th Street and 12th Street. Owner Christopher Pugliese said that their hours for now will be 7 a.m. to 4 p.m. (and possibly 5 p.m.).

There have been several delays with the renovations here. Pugliese's build out got bogged down, in part, by city bureaucracy. As he said last December: "The killer is, the DOB approved all of our major alterations very quickly. They came back to us with a list of about 12 minor objections and asked us to make adjustments. Little things like 'move this staircase six inches to the right,' or 'put the skylight here instead of there.' That has been dragging on for months."

And most recently there was an electrical problem with the main line to the building.

The original Tompkins Square Bagels, which debuted in December 2011, remains open at 165 Avenue A between 10th Street and 11th Street.

Pugliese previously said that there will be several items only available at the Second Avenue outpost, such as knishes from Yonah Schimmel Knish Bakery and bialys. [Bialys not here yet!]

Video: An in-progress look at Tompkins Square Bagels, opening this month on 2nd Avenue
Posted by Grieve at 4:30 AM

Bialys? I'll be right over.

understand your pain/joy (owned a BAGEL NOSH 1977-1989 (sold the 8 remaining years back to the landlord)---buena suerte:)

Great, let's have a toast! And by toast I mean a toasted everything bagel with butter.

If that Garrett guy isn't the nicest person I've ever met, I don't know who is. He's hope for America. I love that guy.

Welcome to second avenue!
Had my first bagel with whitefish there today. Delicious bagel and very nice people

Thanks to all. We are going to try real hard to earn your love. 2nd Ave is the Park Ave of the East Village , so, we consider this the big time :-)

Lived on Tenth between A and B on Tompkins Square
From 1961-69 and loved it. Great melding of ethnic groups and foods...I bet it's changed.

I walked by today and the handmade bagels look delish. I love knishes. Will be by soon.

Mmmmm, whitefish... slobber drool. I'll be over this weekend! ETA on the bialys? Congrats and good luck, BTW.

White fish on an everything bagel is for me.
Melanie
East Village Corner