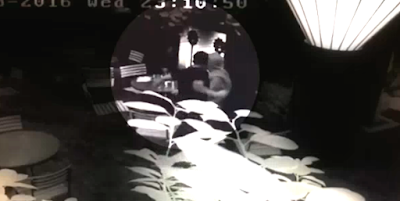 Surveillance video published by NBC 4 New York this evening shows a man run up to a diner sitting in the covered patio at B Bar and Grill and repeatedly punch the victim.

The incident occurred last Wednesday night at the restaurant on Fourth Street at the Bowery.

The footage ... shows the assailant run up from out of the frame as the patron sits and stares at a fireplace. The attacker throws one haymaker after another until several others rush to help the victim.

The 29-year-old victim, who asked not to be identified because the attacker is still on the loose, told NBC 4 New York that his head still hurts several days after the attack.

The victim said there was no warning that he was about to be attacked and that he didn't remember saying anything to the man beforehand. He said over the weekend that he thought he may have been targeted because he was gay.

Police could not confirm whether the incident was being investigated as a hate crime, according to DNAinfo.

Patch reported that the attack took place around 11 p.m.

None of the media reports had any description of the suspect. An earlier post at NBC 4 included this photo of the alleged suspect... 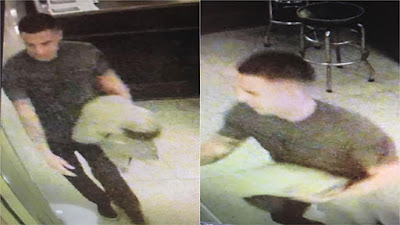 You can watch the video over at NBC 4.

Anyone with information that could help in the investigation is asked to call Crime Stoppers at 1-800-577-TIPS (8477). You may also submit tips online.
Posted by Grieve at 7:54 PM

Email ThisBlogThis!Share to TwitterShare to FacebookShare to Pinterest
Labels: B Bar, NYPD

So much hate , and where does it get the attacker ? Hope they catch him.

I also thought it strange that there was no comment or response from the restaurant / management. At least, not that I heard.

It struck me as strange that the victim said he did not remember if he said anything to the attacker beforehand. It's not likely to forget saying something to a stranger who then pummeled you. Perhaps there's more to the story.

He was punched repeatedly in the head, his memory is probably a little shaky.

Anonymous at 8:51! Why does there always have to be some sort of finger pointed at the victim. Most people in this situation would immediately go into survival mode and yes, maybe not remember everything.

If you or your mother or father were the victim of the same type of an assault would you be speculated on a "story" behind the video?

I'm gay and have lived in NYC over 20 years and have been the victim of 2 "fag bashing". Nothing said before they called me a fag and the fist hit the side of my head. No story, motive...just hate!

There is some really sadistic people roaming the streets. Remember that and pray you and your family will be ok.

A man goes into a bar and attacks another man.

It's not "blaming the victim" to say the two men know each other, it's fair to say they know each other because how often does one stranger come into a restaurant to attack another stranger who sitting down at a table? Seriously, name me one other instance in the past ten years anywhere not just NYC. 'Not saying it's never happened, I'm sure it has, but I can't recall one instance in NYC and I've been here longer than most EVG commenters.

People usually attack other people on the street or at a place they're already in, so this attack is bare minimum highly unusual.