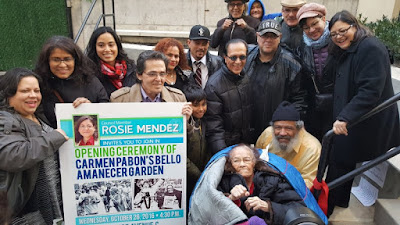 Here's more from an announcement via Mendez...

Carmen Pabón, who was born in June 1922 in Ciales, Puerto Rico, died Saturday night surrounded by her family.

Pabón migrated to New York City in 1946. She lived in the Bronx and worked in a factory. A few years later, she relocated to Manhattan and, in 1955, moved into NYCHA’s Lillian Wald Houses where she lived until a few days prior to her death.

Pabón, well-known for her humanitarian acts, was fondly referred to as the “Madrina of Loisaida” (the Lower East Side Godmother). She volunteered in not-for-profit organizations such as Charas/El Bohío and Loisaida, Inc. Among other things, she was active in the Committee to Save Charas and the Coalition to Save St. Brigid’s Church.

In the 1970s, Pabón became active in the community garden movement. With the help of other residents she removed the rubble from several empty lots located on the southwest corner of Avenue C and East 7th Street. The garden, named “El Bello Amanecer” (A Beautiful Dawn), bears the same name as a mural on the side of the building abutting the garden. She tended to the garden for several decades where she was known for feeding the homeless and providing social services referrals.

In the late 1990s, the City of New York under then Mayor Rudolph Giuliani conveyed many community gardens sites to developers for housing construction. The Lower East Side community lost Esperanza Garden located on East 7th Street and two of the three lots that comprised El Bello Amanecer Garden for the construction of the Eastville Gardens building. A year later, Pabón had to leave the garden to make way for construction equipment.

In 1999, a NYC Council land use hearing with then Councilwoman Margarita López determined that the lot known as Carmen Pabón’s Garden would be a permanent community garden with a not-for-profit garden association that would receive a 99-year lease. After many obstacles, the garden finally re-opened on Wednesday, Oct. 26, 2016. Pabón attended the re-opening ceremony of the garden that was renamed in her honor — Carmen Pabón del Amanecer Garden. 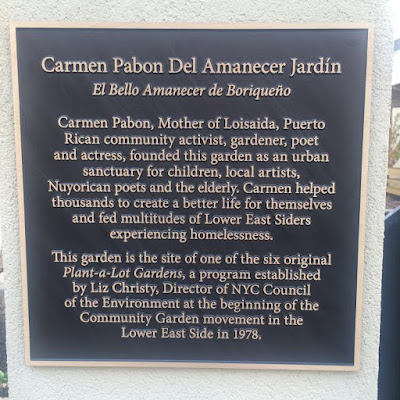 Councilwoman Rosie Méndez said: “I will miss her dearly. All of Loisaida will. I am grateful that she was here for the re-opening of St. Brigid’s Church and that we were able to clear all the hurdles to re-open her garden. I was so thrilled that she was able to go to the garden and cut that ribbon.”

You can watch a video biography of Pabon here...

Previously on EV Grieve:
Part of a community garden reappears 16 years after it was bulldozed
Posted by Grieve at 4:30 AM

So sad Long may you Run RIP

What a life well lived in the service of others, and how touching that she was able to live long enough to see the garden finally reopened. We need more folks like Ms. Pabon in the world, especially now. Thank you for giving us the opportunity to learn about her life and her many contributions to the community. May she rest in peace and power.

Go well, Carmen, you did so much to make this neighborhood better when the city had abandoned us. You've earned your place in Heaven.

What a shining example she is of community service! She just kept on keeping on, for the good of ALL.

I'm glad she got recognition while she was alive. she deserved it. She has certainly inspired others by her magnificent example of how to be a good neighbor in one's community!

I wonder how Carmen felt about her garden being taken over by real-estate vampire Donald Capoccia's "EastVille Gardens" yuppie ghetto next door, as per his deal with Margarita Lopez, who received who-knows-what in return....