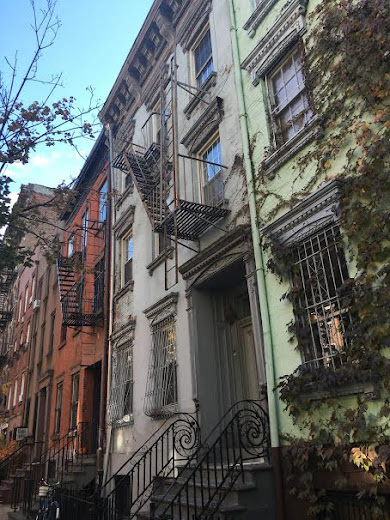 The New York Times checks in with a piece on 264. E. Seventh St., the circa-1843 townhouse between Avenue C and Avenue D awaiting possible demolition.

In late October, the Landmarks Preservation Commission (LPC) announced that they will not consider a row of five pastel-colored residences here for landmarking. As previously reported, preservationists hoped to have the buildings landmarked ... in part to spare the demolition of No. 264 for some unspecified new development. (In early September, a permit was filed with the DOB to demolish the 3-level house.)

The fate of the rowhouse is now in the hands of its owner, Elaine Hsu, the president of GlobalServ Property One, with offices on Lexington Avenue.

Barbara Sloan, the operations manager at Manhattan Renovations, a general contractor representing GlobalServ, said the owner was planning an information session for neighbors “to discuss details surrounding potential asbestos abatement and demolition.” She declined to comment on what might replace the building.

“We recognize that people feel very passionate about their neighborhoods,” said Sarah Carroll, the executive director of Landmarks. But “in some cases, Landmarks designation is not actually the right tool.” 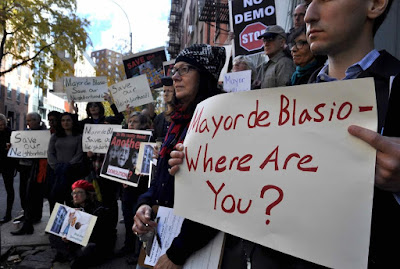 For more history on these buildings in the former Dry Dock District, head over to Ephemeral New York.

As residents of the Dry Dock District gained power and ran for office, the houses acquired a new distinction: “Political Row.”

Political Row “has furnished many office-holders, and there were more office-holders and patriots who are willing to serve the city and county, the State or the country at large, living on that thoroughfare now than on any similar stretch of highway in New York,” stated the Evening World in 1892.

The beginning of Political Row’s end came at the turn of the century, when many of the original houses went down and tenements built in their place.

Newspapers wrote descriptive eulogies, mourning a neighborhood that was “an American District” now colonized by a second wave of immigrants.

Previously on EV Grieve:
City says no to landmarking row of 7th Street homes, clearing way for demolition of No. 264
Posted by Grieve at 4:30 AM

“in some cases, Landmarks designation is not actually the right tool” - the only tool here is the idiot who made this statement. In this iteration of the L "P" C (I use the name loosely), landmarks designation is rarely even considered, given the massive amounts of money changing hands, and DeBlahsio's ceaseless currying of favor with developers so they contribute to his election campaigns. History, age, beauty, scale, tradition, impact on the neighborhood, wishes of local residents? They matter not at all.

More interlopers with money but no sense of history or place.

Welcome to the new reality of not only NYC, but everywhere. Cover the whole planet with glass skyscrapers! Why not? The rest of us will be fine sleeping on pieces of cardboard.

Did Aaron Burr sleep here the night before he went to the Palisades to duel with Alexander Hamilton and kill him over a ladies honor? Think not. The buildings are interesting as many in New York are but not everything can be set aside and frozen in time. On 7th street between C and B a six floor Condominium replaced a one story building that was in bad unused shape. The design and facade compliment the block not all construction is Glass and certainly no skyscraper will be erected in its place here. Since no design has been put forward to the Department of Buildings for approval it is premature to judge the replacement. Actually 7th street had been sprucing up a little lately a few new stoops replacing rot. Doorway entrances with new doors removing the old metal ones that were so out of place on the block with these buildings. Helping beautify some circa 1900 buildings that recalled a different era of a less crime fearing city.

I'm sick of our city being sold to the highest bidder. Isn't there any rich person out there who wants to buy and preserve a piece of old NY instead of tear it down and build something ugly in its place?

". . .Landmarks designation is not actually the right tool.”

So, what is the right tool? She offers no alternative or solution.

If this row doesn't represent a historic district, I don't know what does. The LPC clearly doesn't, either.

I don't get what the big deal is. If we saved every building, we'd be living in the shacks that were the first built here.

Anon. 10:31, I'm guessing you're the person who's always on here talking down all the nice old buildings that get torn down when others are expressing their anger at wanton and totally unnecessary destruction. Why don't you go start your own blog and call it I Hate Old Buildings and Want to See Them All Destroyed? It's not like you won't have plenty to write about, and that way you can leave the people who actually have a feel for old architecture alone.

Anon.1:14 gee one of these days you may actually know what you are talking about. The decision the property owner made I'm sure was not wanton to her. She see's a benefit in replacing it with another building after realizing the restoration of this building to be too costly a project. As for Old buildings I admire and am charmed by many especially when they can be restored and re-purposed. I really like the Romanesque Gothic red brick ones built from 1885-1905 by the Roman Catholic Church as Orphanages and Schools down here and in the West Village. But this is private residential property not public property nor private property that had a public utility.The owner is paying; not a bunch of people with cardboard signs and the afternoon off. Feel so strongly then make an offer for the property yourself or with an investor group. Politely its called fish or cut bait.

@1:03 PM "I don't get what the big deal is. If we saved every building, we'd be living in the shacks that were the first built here."

Take a look around, do you see any "shacks"? These are 160 year old upper middle class homes built at an important historic time for our neighborhood and the city. They are also great examples of an architecture just about gone from from the EV. A LOT of this neighborhood industrial past including the ship building industry has been erased not for the sake of profit of a few buildings of the era will be next. Of course not every building can be saved so this is why we have "experts" which supposedly are independent of the developer industry to safe guard the obvious and often the not so for future generations to appreciate.

@1:14
Other people share the views of 10:31.
These people read and comment on this blog.
More than one person disagrees with you.

@8:11
I'm sure "everyone actually agrees with 10:31.
(He) said "not everything can be set aside and frozen in time"
Problem is; that is not the issue. No one suggested as much. This is what's known as a "straw man argument"
It has nothing to do with the actual situation.
So yeah, I agree with him as well. Bit he's not addressing the actual topic. He's changing it to suit his agenda.

anon 10:02 I truly do not have a agenda as you call it. I just point out that the development of private property within the codes and ordinances of the city should not be infringed upon by interest groups that see change as detrimental and look for political intervention to impede it. The desire to save a old three story house has to come from the owner not a group of non stakeholders asking where is De Blazio, the negative reaction fails to make room and consider what the replacement can be. There is no straw man here just a freely spoken observation about private property and the fact that not all new buildings tear the fabric of the city because they are new, they can surprise and add to the architectural content of a block.

If I am correct the new owner of this building bought it to demolish it and put condos in its place. With certainty the new condo selling literature will say something like "luxury living in the heart of the East Village midst historic homes on a tree lined street". The very thing which makes our neighborhood attractive to developers is the exact thing they destroy for short term profit. It is also a pity that developers get tax breaks and incentives from city government to destroy and seldom to preserve.

9:18 - I don't think this developer will be getting any tax breaks for building condos.

I hate to break it to you but all this landmark designation stuff does is force the remaining mom and pop owners to sell to big corps and when they control everything they will easily get the desiganation removed and build monstrosities.