An early look at FryGuysNYC coming soon to 2nd Street 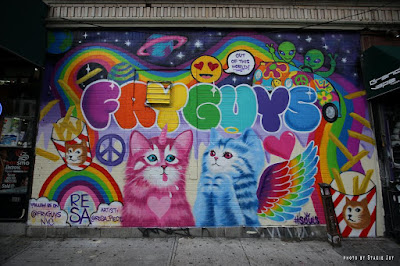 Marco Lanuto and McKenzie Foster, East Village residents partnered in business and in life, plan on opening their 1970s-inspired retro fry shop FryGuysNYC with a touch of grit, glitter, rainbows and an affordable menu at 150 E. Second St. between Avenue A and Avenue B by the end of the year. 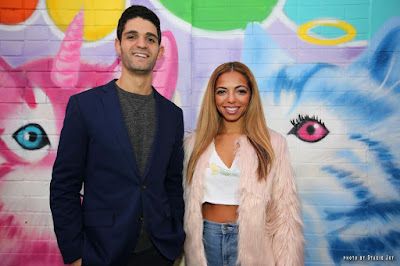 FryGuysNYC will sell meals for less than $10, with main courses such as fried chicken and brisket alongside a large variety of french fries and toppings. (The store also plans on offering dessert fries, such as caramel-infused tater tots with chocolate and sea salt, topped with marshmallow drizzle.)

The recently completed mural next to the storefront (formerly a short-lived vape shop, and prior to that, a Vietnamese sandwich shop) is by artist Theresa Kim, who works under the name Resa_Piece. The owners have given Kim a one-year residency at the shop. In addition, Mosaic Man Jim Power is set to decorate the storefront with his work, and plans are in place for a floor made out of old vinyl records and a ceiling hung with lighted disco balls.

The restaurant’s hours are to be determined, but Lanuto and Foster want to be open for breakfast through late-night snacking. They said they will eventually apply for a beer/wine license and offer $3 beers like PBR.
Posted by Grieve at 4:30 AM

I'm into it. Classic weird LES shit. Just don't appeal only to the filthy, littering, stoop pissin drunkards I beg you. Good luck!

Affordable is the word here. Too many businesses think that the consumer have unlimited resources. We don't. That's why the list of Dead Businesses grows by the day. Good luck! Your place sounds cool.

I have a hard time getting past that baby acid trip painting, at least they left the unicorn off it.

Most children have no idea about art or what kind of food is healthy for them. Just sayin'

5:23PM, Look again, the pink kitty IS the unicorn!

Must check them out. Sounds good.

What happened to these guys? I live across the street and have seen no activity in the space at all, and the mural is now gone too.

Overpriced and undercooked fries, sauces small and unremarkable. I had such high hopes :-(