As previously noted, demolition crews have been removing asbestos and whatever else from the five buildings at 112-120 E. 11th St. ... as you know, these five former residential buildings between Third Avenue and Fourth Avenue are coming down to make way for a 13-story hotel for Marriott’s Moxy brand.

According to the Greenwich Village Society for Historic Preservation (GVSHP), who helped organize several rallies here, the five buildings were ruled "landmark-eligible" by the city in 2008. However, when the buildings faced the threat of demolition this past summer, the city said that they no longer qualified for landmark status, per GVSHP.

Probably a good thing they are no longer qualified... a closer look at the buildings (thanks to EVG reader Jason Solarek for these photos) shows that the ornate details on the buildings have been chiseled off... 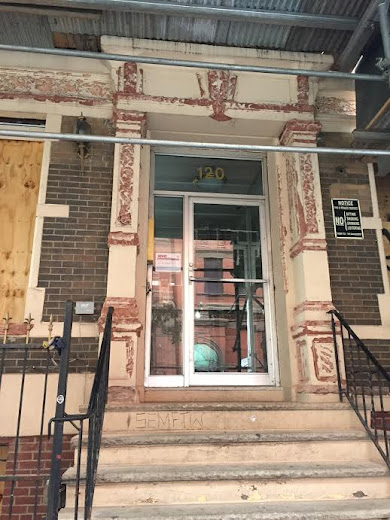 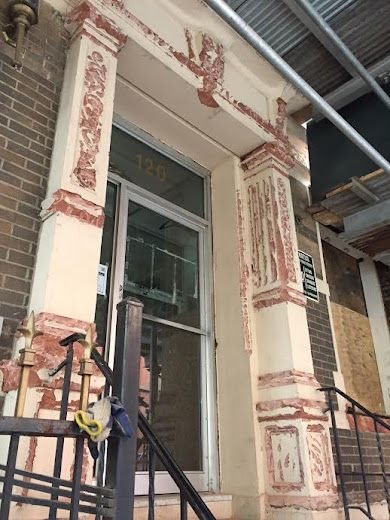 I can't wait to meet my new neighbors!

somebody just made a lot of bucks. we will see these architectural ornaments for sale in some antique store or on line site that specializes in this type of thing.
you know...New York would be a great place if they ever finish building it.

What a chop job!

I really don't understand what they did here.
@ 9:53 AM Workers did not "cut" the ornamental work out as intact pieces. It clearly has just been jack-hammered into rubble. Looks like they are planning to resurface it. But why???

@4:35
By smashing the Beaux-art elements on the building they guaranteed that there would be no possible way to stop the demolition of that and the other buildings on ground of its architectural beauty. Singer did the same trick on one of the dormers of the old school building between (9th and 10th)?? Destroy what makes a building landmark worthy then you get to demolish it.