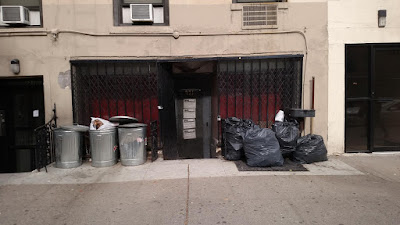 An EVG tipster shares the following from 14th Street between First Avenue and Second Avenue:

"At the end of October, I noticed construction guys at 321 E. 14th St. It has always been a vacant storefront. (I think there was a statue of a Virgin Mary in the window for awhile.) Anyway, imagine my surprise and glee when I read a pizza place was coming!"

Indeed, the work permits do show a "pizza restaurant" in the making... Furthermore, the tipster said that the space will house Artichoke Basille's Pizza, the growing pizzeria empire that opened its first location nearly directly across 14th Street in 2008. Per the tipster, there's a "rent-hike scenario" brewing at the original location. 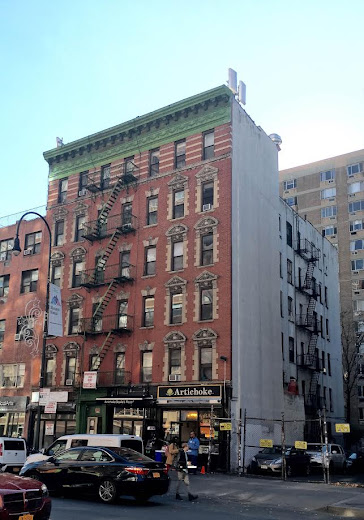 Approved work permits list the name of Francis Garcia, who founded Artichoke with his cousin Sal Basille, as the owner. (Public records lists an LLC with a Flushing address as the owner.)

The permits, approved in September, show the estimated build-out cost for the pizzeria at $72,750.

There are currently nine Artichoke locations, eight in NYC and one in Berkeley, Calif.
Posted by Grieve at 4:20 AM

The now closed Parks Upholstery at 309 E. 14th street also was gutted several months ago followed by what seems to be some basic work, such as Sheetrock. There are permits posted on the door as well as a "For rent by owner" sign attached to the building.

Artichoke's pizza looks to me like someone hurled on it. Can't get beyond the visuals to give it a try.

I hope it has some seating inside. The lack of it (and the people crowding the sidewalk eating slices) has always been annoying. Once tried to sit in their adjacent dining room (empty at the time) and was rudely told it was only for customers ordering a whole pie. *eye roll*

Their pizza is nice but I agree with the non-existant seating and their always empty dining area (how long does it take to eat a slice or two). Foodies get aggressive in that cramped counter space and the whole effort doesn't seem worth it.

The crowds at Artichoke Pizza are long gone. People can only take so many grams of fat per serving. I remember when it was impossible to get a slice there without waiting on line. Thise days are over. But they always gave you a side of their Original New York attitude for free. The people working there always seem so miserable, even when you give them a tip. Their full service restaurant in Chelsea is much more comfortable, and they have a salad in a box that is great, but it's a bit too pricey for a pizza joint, and it all just feels like they are tryng to lighten your wallet. I'd rather drop a hundred bucks at Bice or the old Barolo on West Broadway for a great meal and fine wine than spend $40-$50 for a pizza and salad and cheap house wine.

That being said, their pizza is good, but it's an annoying little place to go since there is almost no room inside to eat, just a little wooden shelf of a counter to slobber over while people push you from behind trying to get their orders. Now I noticed they even lost their benches outside, so it basically just a pizza oven with a tiny foyer. Only Insomnia Cookies on 11th St has less space for the customers. Now Baker's Pizza and Joe's and Stromboli get my business. Sorry Artichoke Pizza, you may have choked Artie but you're not gonna choke me.

The original Artichoke space used to be one-half of Lite Gourmet, a Filipino restaurant that used to serve amazing chicken adobo—and had the space of both storefronts. Anyone remember that?

(This also means it was there well over 15 years ago, because I went vegan 15 years ago September—just after 9/11.)

Also, for great chicken, one just needs to take the M14D down to 5th street and hit up Casa Adela just below 5th and C.

This spot seems to have decent space and MAYBE even outdoor space out back.

I always loved that storefront full of religious articles.

The new space is on the north side of the street and hence, CB6 (not CB3). Now someone else's problem?

@3:01 PM. I remember that place. My first taste of Filipino food. Homestyle cooking and as I recall no tables. Very enjoyable. I used to wonder why Filipino food wasn't more popular and then years later it became more popular.