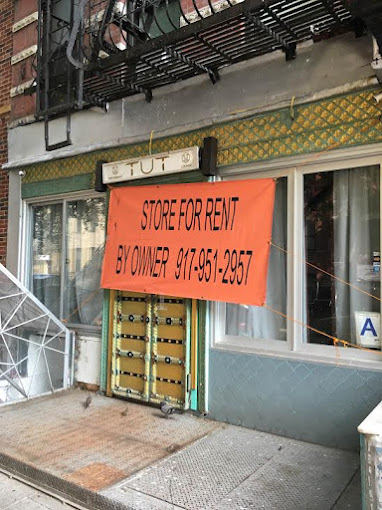 The revolving doors of bars-restaurants at 189 E. Third St. between Avenue A and Avenue B was about to get another go-round.

Since May 2014, the address has been home to Lumiere, Casablanca and Tut, which closed in February after just a few months in business.

Applicant Amar Patel, who managed Lumiere and Casablanca (and his mother managed Tut), appeared before CB3's SLA committee on Monday night to pitch a hookah bar-cafe called Fire and Ice. Patel was proposing daily hours of 3 p.m. to 4 a.m. (See their application here.)

Neighbors and CB3 weren't really into it.

"When I come home at 2 in the morning, the last thing I want to do is deal with another loud-ass bar that I have to try to sleep above," said building resident Michelle Brilliant, who works late hours at a restaurant.

"We just don't want to have to deal with it again," she continued. "It literally is a nightmare."

District Manger Susan Stetzer said the board had spoken to police about the bar, and that 9th Precinct officers considered the spot a "serious problem."

"The history of this place is among the worst that we've had," Stetzer said.

Patel tried to assure community and board members that his restaurant would in fact be "calming," centered around tea and conversation rather than dancing and liquor.

The committee subsequently issued a denial for Fire and Ice, arguably the least calming name in CB3 applicant history.

Previously on EV Grieve:
Restaurant space that has been a lot of things lately ready to be something else
Posted by Grieve at 4:00 AM

Residents of the East Village have to speak up against the infestation of bars and other places posing as tea rooms, cafe etc asking for full liquor licenses and opening hours past midnight. If you want to see what our future could be go to Ludlow or Orchard street on a weekend night and take in the horror that happens there.

But don't we owe it to all those poor people who have ruined their own neighborhoods with soulless luxury highrises to give them a nice place to come, get drunk, and kick tvs on the street to smithereens? Ha ha hoo hoo (me so funny)

Just what the world needs, yet another hookah bar. Because there aren't already enough of them in the EV.