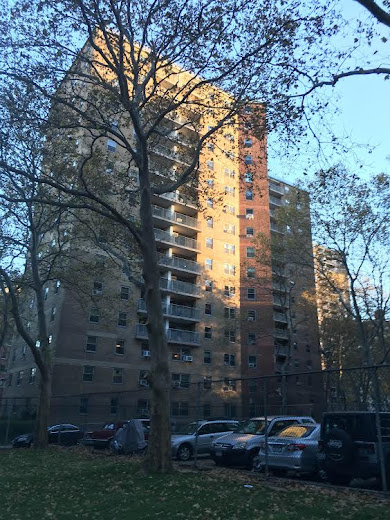 Back in August, there was news that the residents/shareholders of Village View, the 1,200-plus-unit Mitchell-Lama co-op, were mulling over whether to withdraw from the affordable housing program.

As one resident/reader told me: "Most residents have been strongly opposed to privatization and flyers with information on its consequences have been prepared and distributed by residents in English, Spanish and Ukrainian."

On Friday, residents received a letter from the Village View Board president... 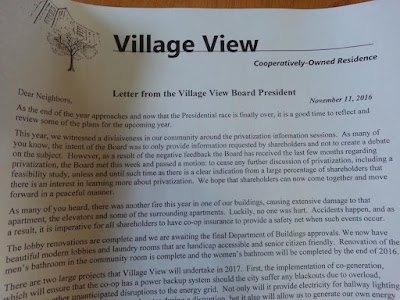 "[A]s a result of the negative feedback the Board has received the last few months regarding privatization, the Board met ... and passed a motion: to cease any further discussion of privatization, including a feasibility study, unless and until such time there is a clear indication from a large percentage of shareholders that there is an interest in learning more about privatization. We hope that shareholders can now come together and move forward in a peaceful manner."

According to the resident/reader, the initial discussions came about "due to a few pro-privatization Board members."

"We soon are going to vote for a new Board and many candidate statements explicitly state opposition to privatization," the resident said. "To our EV neighbors, rest assured that many of us here are ready to fight to keep this development affordable."

Meanwhile,
The mayor and governor want to scheme everything. Giving away 421 tax breaks to the rich and trying to take away hdfc tax breaks for the not rich, tale of two cities indeed!

I'm really glad to hear this -- reminds me of the Village East Towers decision some years ago to stay in Mitchell-Lama and remain affordable. Its nice that neighborhood residents who have benefited from public subsidies so they have stable and affordable housing aren't pulling the ladder up behind them for personal profit.

A couple of weeks ago at Meet The Candidates, the current board members, who are running for reelection, "needed more information" and did not know if they are "pro or against privatization". This week they are all "pro Mitchell lama"- until they get elected. This is all about greed and money. When money comes into play everyone get ugly.

We are still have the most diverse brilliant people here in the East Village, lets keep it that way.

Greed certainly is a question. But since there is a kickback of 45% back to the building management, what type of money are sellers talking about? And where are they going to go once they sell?

anon 11:28 AM: my plan is to vote only for people who explicitly state they oppose privatization in their statements, and i guess now i will also make sure not to vote for anyone on the board currently. sounds like a good strategy?

It is very good news, especially in that residents were unhappy, and spoke their minds; the board heard, and they did something about it (or as I call it "the right thing"). The way it's supposed to work. Sure, there will be politicking and maneuvering in the future, and who knows what will eventually happen. But I am sure happier with the way this campaign turned out than the national election.

I too am considering only for those who are against privatization. However, I fear we've not heard the last of this issue, and am fairly certain it will come up again in the new year. There are those who are for it and will continue to try and push it forward.

Since when is the progressive EV for affordable housing but against democracy? Public cheering when voting is cancelled under pressure is the sound democracy makes as it dies.

4:44PM There was way more involved here then a simple yes/no decision to privatize.

Anyone near the top of the waiting list is relieved.

I'm on the wait list there however there are like 1100 people ahead of me. Would love to live there. LONG LIVE THE EAST VILLAGE!

re anon 12:24 PM. Unfortunately some people own these apartments that don't deserve them. They only look at current income not how much money you have in the bank or other property you may own. You can have a million dollars in the bank and own another house but if you're semi retired making $40k a year you can still own an apartment.

12:21: Actually, technically, everyone who's in these apartments deserves them as they meet the rules.

What type money are they talking about? Where will they be going once they sell? Good questions.

For those people who want to have the freedom to leave Village View and live somewhere else because they've been here too long and yearn for a new life, then, just go already and don't let the screen door hit you on the way out. Those who have been on the waiting list for years are entitled to their turn to live here that's what waiting lists are for. Leaving with your pockets lined with green without any regard to others who need an affordable apartment is greed and arrogance at its worst. Voters should get out and elect new board members who clearly want to stay in Mitchell Lama. Time to get out the broom and get people voted in who care about the less fortunate.

Ah so it's okay for developers to rake it in but not longterm residents? GTFOH.

If this 84 year old rented this apartment for 40 years, he/she never owned it this sacrificed owning a home. That 1M is a reward for that sacrifice.

This isue is complicated. Some Manhattan Mitchell Lama coops have opted out, some have not. Southbridge Tower opted out recently, so did Coop Village 15 years or so ago. Other coops have opted to remain low equity, e.g., Penn South. It is up to the coop owners and the boards of these coops to decide. Not the city, not the outsiders who want in, that is how the law is structured. There are some financial circumstances that make privatization easier for some coop's over others. There are some nonfinancial issues that effect the choice also. A formal feasibility study would hash out the options, seems like Village View figured it was not even worth doing the study. That is their choice.

Agree . And we should voice our opinion louder. Anybody knows if there is any petition to the Board that we can sign to restart education about privatization?

Hi Is there group of shareholders who are for continuing education process about privatization? Or a petition we could sign to resume provatization education?
Apprieciate response